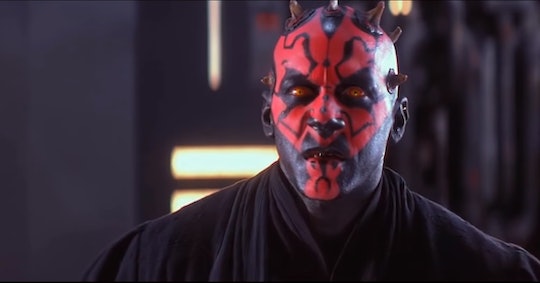 Revenge Of The Fifth Memes Are Officially A Thing

Listen, if you're going to embrace one corny Star Wars pun, you're going to have to embrace them all. At least, that's what I keep telling myself, because as a May the Fourth purist, I was not looking forward to the following day. But these Revenge of the Fifth memes have swayed me. I used to think of Revenge of the Fifth as a bridge too far, and also an unnecessary endorsement of the prequel trilogy, which taught more than one generation the meanings of betrayal and profound disillusionment. But then I realized that I was being awfully dramatic, and all it really means is an extra day of Star Wars jokes on Twitter. That, I can get behind!

But still, there's a line. Some Revenge of the Fifth memes, tweets, and jokes are just building on all the fun we had yesterday. Others are too much. It's like Pi Day: cooking a chicken pot pie for dinner, maybe even making a little pi symbol on the crust? Cool. Having quiche for breakfast, shepherd's pie for lunch, chicken pot pie for dinner, and four different fruit pies for dessert and snacks? Rein it in, buddy. That's quite enough. Allow me to demonstrate:

This GIF has always tickled me. I approve this tweet.

This is also good. It is good because there's a horse in it, and that's ridiculous.

No. Stop. That is quite enough. Close your computer and go watch Rogue One.

This is fun because makeup and cosplay are an art form, and I am always down for that. Also, I may or may not have attended The Phantom Menace wearing Queen Amidala makeup, so I feel like this woman gets me.

Star Wars has always been right on the line between pop culture and nerd culture. Creating a party game wherein the players debate the merits of their favorite "military or political leader" in the Star Wars universe does not help the cause. The Force is about balance! Let's not exclude casual fans by obsessing over the Galactic Senate, OK?

Yes, please. If we're choosing between cultural appropriation as an excuse to drink Corona and celebrating a franchise that unites all cultures, I'm going with the latter, thank you very much.

NOPE. No Jar Jar. No joking that he turned Sith, no exploring whether he was a racist stereotype, no fanfiction about him dying 1,000 terrible deaths. The proper way to deal with Jar Jar Binks is to pretend that he doesn't exist.

Hell yeah. Costumes are appropriate in nearly every setting except funerals, and this is a brilliant way to promote a band. I found this while searching for Revenge of the Fifth content, and then became intrigued by their bio, which identifies the band as "bridging the gap between Pop-Punk, British Rock and Math Rock." Now I want to hear them. Good show, boys.

Did these kids get out of first period in order to draw Star Wars stuff in the school library? A million high fives.

Lego is great. The bricks, the movies, the video games, the free magazine that my son gets, all of it. But excuse me, did they just refer to Boba Fett as a Jedi? Do your research! Gah!

This is a very good joke. But then I realized that I needed to include a link in case some readers didn't know who Dolly the sheep was, and now I'm feeling old, so I'm calling it a tie.

The bottom line is that you need to be very careful when participating in Revenge of the Fifth, lest you anger those who have very strong and specific feelings about Star Wars. It's an art form, and if you can't hack it, maybe just take a seat.