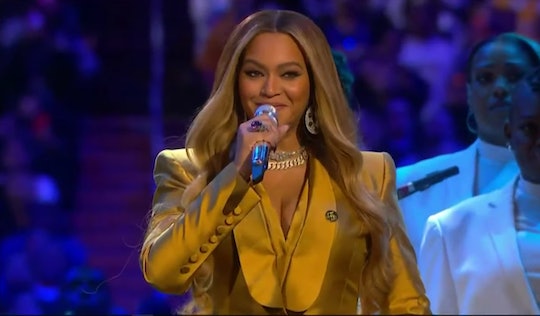 Friends, family, and fans gathered at the Staples Center in Los Angeles, California, on Monday to remember Kobe Bryant and his daughter Gianna in a memorial service that featured a number of emotional tributes. Among those tributes was a beautiful performance from Beyonce, who sang a number said to be special to the late NBA legend. And in case you missed Monday's celebration of life, you can rewatch Beyonce's moving performance at Bryant's farewell service online.

Introduced as "a very close friend of the Bryant family," Beyonce opened Kobe and Gianna's memorial service by singing her single "XO," which she said had been favored by Bryant, who was killed in a helicopter crash last month in Calabasas, California along. His 13-year-old Gianna and seven others were also killed in the tragic accident.

"I'm here because I love Kobe, and this was one of his favorite songs," she said. Dressed in a gold pantsuit with pops of purple in her nails and jewelry as a nod to Kobe's time on the Los Angeles Lakers, Beyonce then asked the audience to join her in singing the song. "I want us to [sing] it all together and I want you to sing it so loud that he hears your love," she said, gesturing to the sky.

The singer was accompanied by a choir and a number of string instruments, including a piano, violins, a cello, and a bass. After singing "XO," Beyonce moved seamlessly into singing her hit single "Halo." That performance can also be rewatched online.

According to the Los Angeles Times, Beyonce has known the Bryant family for years. In fact, Bryant even made a cameo in Destiny Child's 1999 music video for "Bug a Boo." During a break from filming, Kobe even played a little one-on-one with Beyonce's father, Mathew Knowles. In recounting the story to Fox Sports in a 2019 interview, Bryant said that, at the time, he'd already known Beyonce and fellow Destiny Child singer Kelly Rowland "for a long time."

"Our careers were kind of parallel tracking," he told Fox Sports of his friendship with the singers. "I was just starting to try to come into my own, they were doing the same thing. We were kind of ascending at the same time."

While speaking at Columbia University earlier this month, Beyonce's husband, rapper JAY-Z revealed he'd last spoken with Bryant when the retired NBA star attended his and Beyonce's New Year's party. "He was last in my house on New Year's and he was just in the greatest space that I've seen him in," JAY-Z said, according to Entertainment Tonight. "One of the last things he said to me was, 'You gotta see Gianna play basketball.' And that was one of the most hurtful things because he was so proud."