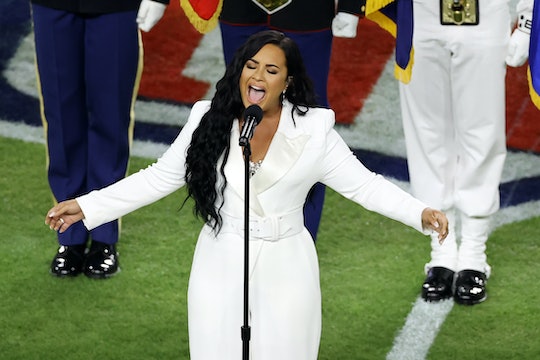 As the pre-game festivities kicked off the big game between the San Fransisco 49ers and Kansas City Chiefs on Feb. 2, viewers likely took note of who sang "The Star Spangled Banner." Because the performance was phenomenal. But just in case you missed it, let's take a look at how to rewatch Demi Lovato singing the national anthem at Super Bowl LIV.

Lovato was on fire Sunday evening as she sang a soulful rendition of the national anthem, which clocked in at just under 2 minutes. Fresh off her emotional comeback performance at the Grammy Awards last weekend, the star looked and sounded confident on Feb. 2 — and even adding her own riffs at the end to "home of the brave."

Twitter simply couldn't get enough of Lovato's performance. One person gushed, "THIS is how you do the National Anthem. Demi Lovato killed it."

Yet another person tweeted, "Best rendition of that since Whitney Houston did it. Love Demi Lovato." Yes, they went there.

Take a listen of Lovato's performance, below, and see if she lives up to Houston's rendition for yourself. Because if you weren't already aware, this girl has some serious chops — and she definitely gave it her all during this year's Super Bowl.

Of course, this isn't even Lovato's first high-pressure national anthem performance. She sang "The Star Spangled Banner" during the World Series in 2015. And in 2008, Lovato performed ahead of a Dallas Cowboys game.

Still, seeing Lovato crush it on Super Bowl Sunday was extra special for fans, considering where the singer was — physically and mentally — in 2018 following an apparent drug overdose. Hopefully, this is only the beginning of a long and successful comeback for the talented performer.