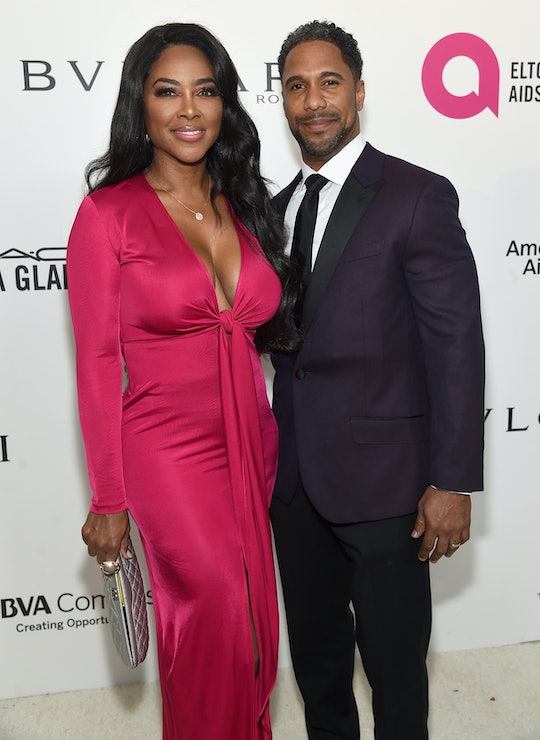 'RHOA' Star Kenya Moore Is Pregnant With Her First Child!

There's plenty of good news coming out of the reality television franchise these days. On Sunday, it was announced that Real Housewives of Atlanta stars Kenya Moore and Marc Daly are expecting their first child together, according to E! News, and it's clear that the happy couple is totally elated to be able to share the news.

During Sunday night's episode, Moore revealed that she and her husband were officially expecting their first child together. After host Andy Cohen asked whether or not a baby was on the way for the newlyweds, Moore happily replied that they would, actually, according to E! News.

"We will definitely be welcoming a boy or girl in late this year," Moore said during the RHOA Season 10 reunion on Sunday night, according to Us Weekly. “Oh, my God, I said that! I don’t want to talk about the details because I’m still very nervous about everything so I want to get past a safe place.”

Moore and husband Daly were married 10 months ago, according to People, at a beach ceremony in St. Lucia. At the time, Moore exclusively told People “We both want to start a family and soon — like, right away. We both want a child.” And now, it seems as though their dreams are becoming a reality.

And clearly, Moore is just elated to be expecting. When she was asked whether she wants a boy or a girl, the 47-year-old simply replied, "I want a healthy baby," according to People. A pretty proper answer, considering that Moore has been upfront with the couple's hopes to start a family, even going on the RHOA After Show in January to address the pregnancy rumors surrounding her with blatant honesty. According to Bravo, Moore replied, "I hope so. You know, listen, we have been really up front about wanting to expand our family, and we have definitely been taking the proper steps to try to make that happen."

Those proper steps have certainly paid off, and based off of her interview with People following her wedding, it seems like Moore has truly found the one, and the one to start a family with. According to People, Moore explained:

On top of all that, People also reported that Moore was reflecting on the possibility of starting her family in the RHOA season finale. "A year ago I would have never expected I’d be where I am now," she said, according to People. "I am possibly expanding my family." Fortunately for Moore, she met the right person at the right time. After her wedding, Moore explained that it was practically love at first sight. According to Essence, she said, "I knew the first day. I remember calling Cynthia [Bailey] from the show, and was like, 'I just met my husband.' It was that kind of chemistry."

Obviously, it's worked out well for the happy couple and fans seem to be thrilled with the news, with many taking to Twitter to congratulate her.

For now, there aren't too many details about the happy couple's news, but hopefully Moor and Daly will fill fans in along the way. In the meantime, many congratulations are certainly in order.