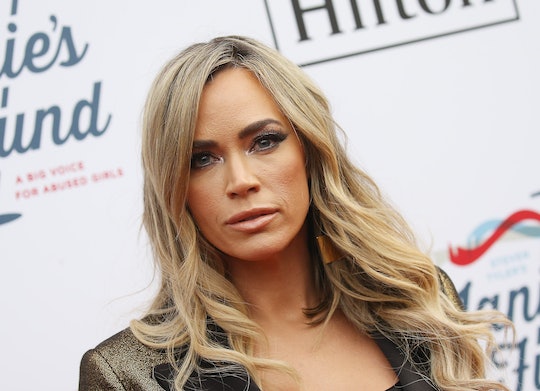 'RHOBH's Teddi Mellencamp Opened Up About Her Miscarriages, & It's So Important

They say that 1 in 4 pregnancies ends in miscarriage — and yet from experience, it's easy to feel incredibly alone when it does happen to you. Feelings of anger, guilt, and indescribable sadness can follow a pregnancy loss, regardless of how early on it occurs. Although in recent years, social media and celebrities have helped raised awareness for how common miscarriage really is, there still seems to be a certain stigma attached to it. Which is why we need to keep talking about it — and why RHOBH's Teddi Mellencamp opening up about her miscarriages is so important.

If you're not familiar with Mellencamp, the Real Housewives of Beverly Hills star (and daughter of singer John Mellencamp) currently has two children — a son, Cruz, 4, and a daughter, Slate, 6 — with her husband, Edwin Arroyave. The reality star attended the RHOBH and Mexican Dynasties red carpet and premiere held on Tuesday, Feb. 12, when Us Weekly caught up with her. "I have to share who I am because I hope that somebody else will feel a bigger relief because of it and know they’re not alone," Mellencamp told the publication. "I feel like when I was struggling … I got really deep and dark inside of myself, and I wasn’t very vulnerable with the people around me. I think I struggled more because of it."

That’s why I tried talking about it because, had I known how common it was for women to have miscarriages, maybe I wouldn’t have gone so deep, dark into my shell. … Had I been more open with people, maybe I would have heard more experiences and stories.

As OK! magazine reported, Mellencamp first revealed back in November that she's suffered not one, but a number of miscarriages through the years. "I had multiple miscarriages before Cruz, and the IVF process was very hard for me and I’m not sure I can go through it again," she wrote on her Instagram Story, in response to a fan asking if she wanted to have more children. "I feel very blessed with the kiddos we have."

Mellencamp also spoke with OK! on the red carpet on Tuesday, Feb. 12, and explained that she still feels some trepidation about the idea of trying to have any more kids. "For me, I had to go through IVF, so it's a struggle for me," she said. "My business is great, kids are great, my marriage is great right now. I'm a little bit worried about having to go down that road again."

Mellencamp's most recent commentary on the topic, in my opinion, sheds even more light on pregnancy loss. Years ago, I experienced an early miscarriage between the birth of my first and second children — and like Mellencamp, I sort of just curled up inside myself and spiraled down a dark hole. Although I was aware that up to one in four pregnancies ends in miscarriage, as Tommy's noted, I honestly never thought it would happen to me. (I was healthy and young, and I did everything "right," after all.) Ultimately, I emerged from this darkness a few months later, and ended up having three more healthy children.

In my opinion, Mellencamp makes a valid point about the benefits of talking about miscarriages. Although to be fair, not everyone copes in the same way. Privately grieving might be what's best for one woman, while leaning on others with similar experiences might be healing for others. Still, I wholeheartedly agree with this: Getting the information about how miscarriages are in the first place might at least help women feel less alone — even if they're not comfortable sharing their loss others.