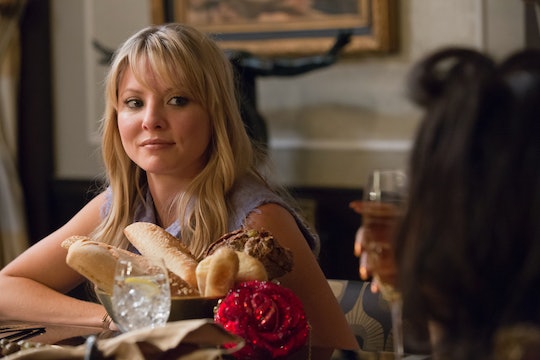 Rhonda Returns To 'Empire' But Not In The Way You Wanted

In case you're still in shock, Anika murdered Rhonda – Andre's wife – in the first scene of Empire's third season. Understandably, Andre spiraled after her death. Not only was Rhonda not given justice, but Andre's mental health suffered. This manifested in him hallucinating that Rhonda was there. This continues to happen...even in the most inopportune moments. During this episode, Rhonda returned to Empire, but not in the way we wanted her to.

It was clear in the beginning of the episode that Andre had his sights set on up-and-coming artist, Nessa. Of course he was interested in her from a business perspective; he and Lucious want to sign her on to Empire, which is turning out to be a full-on bidding war with rival Shyne Johnson. But as Nessa sang, they shared a look that was not at all professional...was Andre really moving on from Rhonda already?

Well, yes and no. Towards the end of the episode, Andre and Nessa got extremely close. At first, Andre was hesitant; Nessa said it was okay, and that she knew he lost his wife. This is where things got weird: Rhonda appeared to Andre as she's done before. Now, though, she was encouraging Andre to be with Nessa. As the camera panned away into the darkness, it led us to believe this was some pseudo-threesome.

As Empire fans on Twitter were quick to point out, Rhonda has yet to receive a funeral on the show:

Will Rhonda be laid to rest, literally and figuratively? It's uncertain. The further we get from the murder, the less likely it is that we'll see a funeral. Furthermore, this feud between the Lyons and Shyne seems to be absorbing most of their attention for the time being.

As for Andre, it's clear that he is still in mourning – which, given the facts that it just happened and she wasn't given a funeral, is not at all surprising. His hallucinations of her only seem to escalate, now to the point of appearing when Andre is with another woman. Given that the feud is over Nessa and which label she'll sign with, whether her and Andre's relationship will continue will be determined by how to feud plays out. We'll have to keep watching to see how all these elements of Empire unfold, and whether Rhonda's ghost is involved or not (and if she'll finally receive a funeral).