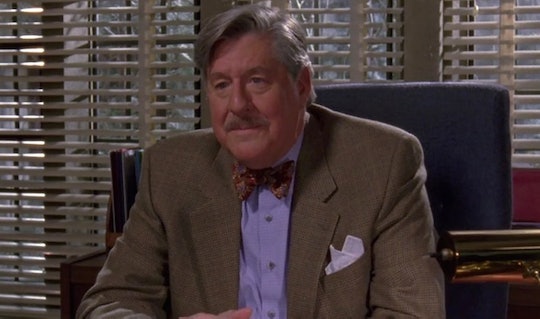 (Warning: This post contains spoilers from Episode 4 of the Gilmore Girls revival.) I knew from the very beginning that Richard Gilmore's death was going to play a prominent part throughout the four-part revival, but I wasn't fully prepared for what it would do to my emotions. In fact, there was barely a scene that involved him that didn't have me tearing up. But none of that compares to when Richard Gilmore actually appeared in the Gilmore Girls revival and made me lose my damn mind. Seriously, I was in no way prepared to physically see him sitting there at his desk during Rory's memory tour of the Gilmore mansion.

Now, of course, this wasn't a new scene filmed by Richard since the actor who played him, Edward Herrmann, died of cancer back in 2014. But that's the beauty of this technology-savvy world that we live in. As Rory walked through the house, with the echoes of past memories ringing through the halls, she opened the door and for a moment briefly saw her grandfather working at his desk like he has done countless times. This was undoubtedly done by using old footage of Richard from prior seasons, which was perfect to serve as part of Rory's memory.

Richard and Rory were very close throughout the original series and they shared many things in common — one being their love of literature. That's why it was so perfect for her to walk over to his desk and sit down to write the story about her life as a Gilmore. In a way, the book also serves as a way for him to be preserved and kept alive — for others to know who he was and how much he meant to those around him.

It was also fitting that the portrait of Rory that Emily had done was still hanging up in the room. Rory has come so far from the young girl she once was when that portrait was created. So to see the two of them side-by-side was a neat contrast as well, especially since there's now a portrait (a very, very big portrait) of Richard in the living room.

So while Richard's surprise appearance may have caused me to sob uncontrollably for 10 to 15 minutes (OK, fine, it was 20), it was still such a nice nod to the character we all came to love so long ago. And it also served as further proof that the ones we love never really leave us for good. They exist in our memories forever and Richard's cameo is proof of that fact. He may be gone, but he'll never be forgotten.