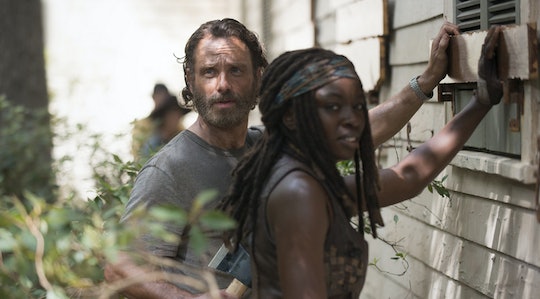 Well folks, it finally happened. Rick and Michonne hooked up on The Walking Dead's most recent episode, and fans of the AMC series are more than thrilled. Seriously, my hands are shaking from excitement as I report this Richonne news. After suffering from seriously sh*tty days, the two were just kicking back on the couch and trying to relax. Rick then cleverly slipped some breath mints in Michonne's hand (to be fair, she had requested tooth paste earlier in the day.) That led to a hand hold, which led to a kiss, which led to a naked Michonne and Rick in bed the following morning, which led to squeals from Richonne shippers everywhere.

It's a hook up that's been three years in the making. One that fans have hoped for since the day Michonne stepped onto the scene, katana in hand. Though their relationship was rocky in the beginning — Rick had just lost his wife and Michonne had been betrayed by her only post-apocalyptic friend — the two formed a fierce friendship that many hoped would become something more. The two defended each other against both the living and the dead, and have saved each other from self-destruction on multiple occasions. (Remember when Michonne knocked Rick on his ass for being, well, an ass to the Alexandirans?)

But the love goes beyond the two of them. Rick's son Carl has a special connection with Michonne. He sees her a friend in the sense the he can confide in her, but he also sees her as a motherly figure and will listen when she tells him to do something. And, like a mother, Michonne jumps into action when Carl is in danger. Nowhere was the more evident than in last week's episode when Carl lost his eye, and Michonne planted a kiss on his head before heading out to battle the zombies.

So yeah, you can see why fans would be thrilled over Rick and Michonne's hookup. As soon as the #Richonne romance was revealed, fans took to the Internet to show their excitement.

Of course there were a few haters.

But the rest of the world was there to shut them down.

Of course, The Waling Dead's latest hook up comes with a long list of questions. How will Carl feel about the romance? Will these lead to tension among the original group? Will there be yet another TWD baby? I for one can't wait to find out.