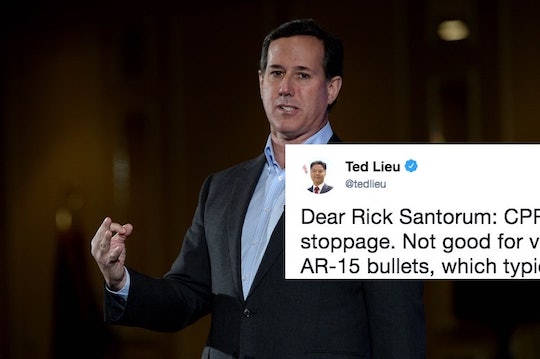 This weekend, scores of protesters took to the streets across the United States to protest gun violence. Led by the survivors of the shooting in Parkland, Florida, many of the protesters were still children and the demonstrations themselves were primarily organized by a group of determined teenagers. While many have lauded their bravery, Rick Santorum said that kids should focus on CPR classes instead of tackling gun violence and people on social media were not impressed with his suggestion.

Appearing on CNN's State of the Union on Sunday, the former Republican senator from Pennsylvania said that the children behind the March For Our Lives should focus their efforts on being able to medically respond to an active shooter, instead of trying to prevent one in the first place.

"How about kids, instead of looking to someone else to solve their problem, do something about maybe taking CPR classes or trying to deal with situations where there is a violent shooter?" he said on CNN’s State of the Union Sunday, according to Esquire. CNN reported that Santorum did concede and said that he was proud of the children for organizing such a large protest, but that he didn't think stricter gun laws would solve any of their problems.

Santorum's comments were not well-received on Twitter, where many expressed their outrage at his remarks, especially considering the emotional impact of Saturday's protests.

Also on the State of the Union panel was Van Jones, who told Santorum, no who's no longer an elected official, that he had a son who was about to be in high school and he was hoping he never had a son who needed to revive a friend from being shot at school. "I want him focused on algebra and other stuff," he said. "If his main way to survive high school is learning CPR so when his friends get shot ... that to me, we've gone too far. I'm proud of these kids. I know you're proud of these kids too."

Santorum then said that he was proud, but that he thinks "everyone should be responsible and deal with the problems that we have to confront in our lives," per CNN. It wasn't just Jones who took issue with Santorum's comments. Many on Twitter called the former senator misinformed and insensitive for his remarks.

However, Santorum continued with his remarks, according to CNN. "And ignoring those problems and saying they're not going to come to me and saying some phony gun law is gonna solve it. Phony gun laws don't solve these problems." Santorum also suggested, according to Politico, that the organizers of the protests and those behind the March For Our Lives movement weren't really willing to take enough action:

They didn't take action to say, "How do I, as an individual, deal with this problem? How am I going to do something about stopping bullying within my own community? What am I going to do to actually help respond to a shooter?" Instead of going and protesting and saying, "Oh, someone else needs to pass a law to protect me."

Twitter users far and wide have taken to the social media platform to express their anger at Santorum's comments.

After Santorum's appearance and comments on the show, CNN reported that Everytown for Gun Safety released the following statement:

Rick Santorum's words are an insult to the kids of Parkland, my family and to the countless others who have had loved ones taken by gun violence. My mother was killed while protecting her students at Sandy Hook School. For anyone to suggest that the solution to gun violence is for kids to learn CPR is outrageous, and indicative of the NRA's desire to do or say anything except strengthen America's weak gun laws.

Indeed, many took issue with Santorum's message following the March For Our Lives demonstrations. But given these teens' determination thus far, these comments will likely only inspire them to work even harder to end gun violence.

More Like This
The President Of Ireland Wants To Get Rid Of Homework & Honestly, He's Onto Something
Teacher Shot By 6-Year-Old Student Told School He Had A Gun, Was Told To "Wait"
Florida Teachers With “Unvetted” Classroom Books Could Face Felony Charges
Jacinda Ardern No Longer Has “Enough In The Tank” & Moms Know Exactly What She Means
What Parents Are Talking About — Delivered Straight To Your Inbox