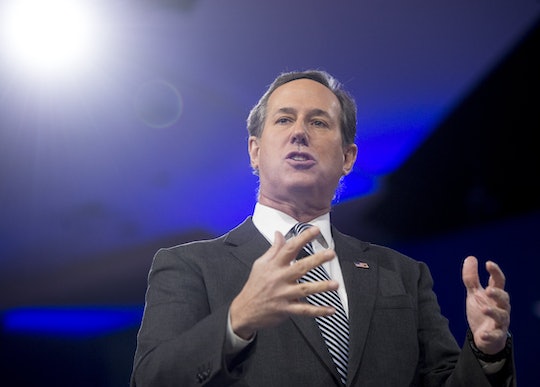 Rick Santorum Tells Dreamer To Leave The Country, Despite Her Major Contributions

Sometimes it's hard to tell what a politician really wants when they're on a national stage attempting to appeal to a broad base of voters. But not former Pennsylvania Sen. Rick Santorum. If one thing can be said about Santorum's policy stances, they are always made very loud and very clear. Like on Tuesday night during a CNN Town Hall, when Rick Santorum told a Dreamer that she should leave the country if she wants to be successful. He was also very, very, clear about his stance on immigration policies enacted under the Obama administration. Romper's request for comment from Santorum's team was not immediately returned.

At the televised event, Elizabeth Vilchis, who has been in the United States since she was 7 years old and is now a mechanical engineer, asked Santorum how she should proceed to plan her future under a Donald Trump presidency.

“I stand to lose all the work that I’ve done if the new administration decides to end DACA,” Vilchis said. Like many in her position, the future remains very unclear, she explained.

Santorum wasn't able to offer much consolation. He said that he sympathized with her worries but that she might be better off elsewhere. “What most people in America feel is that you’ve been given a tremendous benefit by being here in this country," the former GOP candidate for president advised. "... My final point is that you have the ability to go to any other country right now and apply those wares, and be successful, and reapply to come back to America. Go and make the world a better place."

DACA is the Consideration of Deferred Action for Childhood Arrivals policy that President Obama enacted in 2012; It allows for undocumented immigrants who came to the United States as children to renew their status every two years and remain in the country, if they meet certain requirements.

Ana Navarro, another CNN contributor present at the town hall panel, stepped in and told Vilchis that she belonged in the United States, despite Santorum's directive. But Santorum held his position. “That’s not what the law says. As much as I’m sympathetic to you, you should recognize the gift that America has given you and that you can give to the world," he added.

If putting people to work and being competitive is a goal of the administration, then Santorum's advice to Vilchis makes no sense. Santorum's own parents entered the country under tough immigration laws decades ago. If nothing else, it sounds like his stance on immigration comes down to what kind of immigrants are allowed to enter and stay.

If you are an undocumented immigrant currently protected under the law (or any immigrant, or human, at all), Santorum's explanation sounds a lot like getting the boot. On the campaign trail, Trump and his surrogates too spoke about taking a hard stance on immigration and getting rid of DACA and other protections for immigrants, especially ones like Vilchis who have been in the country their entire lives and established lives for themselves.

While the Trump transition rolls on, many undocumented immigrants are left with very little, other than statements like Santorum's on Tuesday night, to work with. How do you plan for next year if you don't know if you can live and work in the same place you are now? You can't.

Meanwhile, the president-elect hasn't made any guarantees about any of the immigration rhetoric voters heard on the campaign trail. No one knows yet what Trump policies will be "softened" and which ones are in the works. Lives are in the balance.

The immigration policies enacted under Obama that Trump and Santorum want to get rid of created a path for undocumented immigrants in the country to work. But on Tuesday, Santorum told an immigrant woman to pack up her skills and perspective and take them somewhere else because "many Americans" believe that she shouldn't have earned those skills and successes here in the first place.

Forget "immigration policy" for a minute and just look at the bottom line, if nothing else. Isn't retaining talent and making America great the objective here? Making women like Vilchis feel unwelcome is not the way to go about doing that.