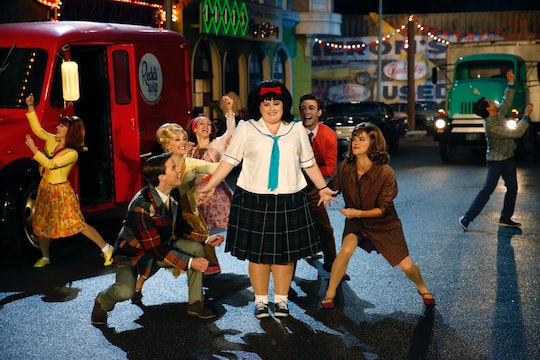 Hairspray Live! just wouldn't be complete without a little shoutout to the Tracy Turnblads who came before newcomer Maddie Baillio. Ricki Lake and Marissa Jaret Winokur's cameo in Hairspray Live! was quick and beautiful. I only wish that they had been on screen for a little bit longer. Before Hairspray Live! aired, both former Tracys confirmed that they would be a part of this live show in a small capacity, even if they weren't featured in any big role (though I kind of would have love to see them more).

The two former Tracys were just visible opening the door to Mr. Pinky's for Tracy and Edna as they went to get their big makeovers during the incredible "Welcome to the '60s" number, which is arguably the best song in the whole show (don't fight me on this). They were distinguishable pretty much only by their adorable gold headbands and by Winokur's incredible grin, which literally would not quit.

Midway through the show, in one of the behind-the-scenes shots, the two were spotted sitting in the dressing room. They stopped to give a little shoutout to the latest Tracy Turnblad: "From one Tracy to another to another: Maddie, you're killing it!" Lake said.

Every actress brings a little something different to the role of the energetic sparkplug teenager, and there has honestly never been a real consensus as to who the best Tracy is, though every single one who plays the part is necessarily compared to Lake, who made the role famous to begin with. As her first big role, perhaps Baillio will follow in Lake's footsteps in more than one way, and perhaps this will be the beginning of a long and successful career in show business. She's certainly on her way.