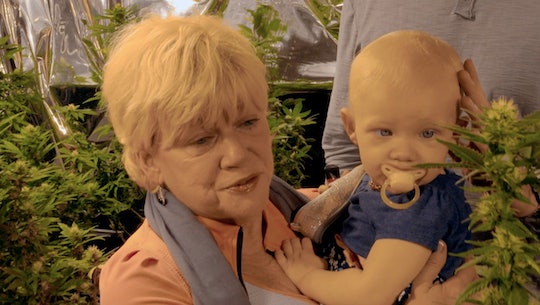 The mission to have marijuana legalized within the United States is not just about recreational use, but few people seem to know that. In a new documentary, Weed The People, executive producer Ricki Lake strives to educate Americans (and the rest of the world) on how marijuana can save lives — especially in pediatric cancer patients. I had the pleasure of chatting with Lake on the phone after watching the documentary, which, as I told the EP, totally "blew my mind." Lake was delighted to hear this, which makes sense since that is the exact purpose of the film.

"That's how change happens — is when you're educated, you're informed about something," Lake told me enthusiastically. "It's a travesty that this plant is not available to anyone and everyone that needs it, especially children." As someone who has already seen Weed The People, I can't agree more — and I feel very strongly that you will, too, once you've watched it.

Lake shared with me that she has been working on Weed The People for over five years, so it seems almost brainless to assume that she is much more versed in the business of marijuana than I am. Out of curiosity, I ask Lake what the biggest misconception of marijuana is. Lake tells me, "Well, first of all, it being a Schedule 1 drug, and them saying there's no medicinal value, and... that's just ridiculous." In the same breath, Lake also reminded me that marijuana (which she calls cannabis) is considered dangerous on nearly the same scale as heroin.

"I think it's about this movie giving a real backstory of how this medicine came to be made illegal, and the xenophobia, and the racism, and all the things that happened over the last 75 years," Lake continues, explaining that there are so many different avenues that need to be combated when it comes to marijuana. "I think it's a really fascinating history lesson."

But Weed The People isn't just about misconceptions and legalization, which is a very important detail that Lake doesn't want to brush over. It also tells the stories of a handful of children of all ages (from infant to teenager) who are suffering from different forms of cancer. Over the course of five years, we watch as a handful of children ranging in age have their lives completely reformed just by using marijuana for it's medicinal value. We also watch as these families are struggling to not only gain access, but also the funds to pay for the one and only treatment that might help keep their children alive.

Lake is also fully aware of the sacrifice she asked the parents involved with the film to make. As she explained, "These families were incredibly brave to trust us and to get on board, but they also got access to this medicine and got care that they might not have gotten otherwise, and they're gonna help so many people by sharing their stories."

For example, Sophie, a beautiful baby girl and the youngest of all the pediatric cancer cases featured in Weed The People, is revealed to be trying cannabis oil in an effort to shrink her brain tumors. Lake recalls that Sophie's first on-camera scan was pretty terrifying, because after three months of nothing but cannabis oil treatment, the filmmakers had no idea what the results would be. This was a first for everyone involved, after all. Although the tumors didn't disappear from Sophie's brain, they had gotten a little smaller — so her parents continued to use the cannabis oil treatment along with chemotherapy. I don't want to spoil any bit of the documentary for you, but lets just say that Sophie's next couple of scans revealed the proof was in the pudding — or, in this case, the cannabis.

Weed The People is available in select theaters starting Oct. 26, 2018.

More Like This
What Parents Need To Know About Hulu's Predator Prequel Prey
Teachers Reveal The Go-To Movies They Love To Show In School & Why
All The Family Movies We’re Looking Forward To Seeing In 2022
10 Cozy, Romantic, & Drama-Filled Shows To Watch If You Love 'Virgin River'