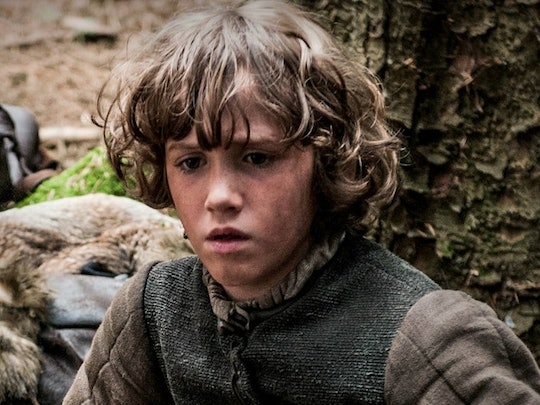 Rickon Stark Returns To ‘Game Of Thrones,' & He's In Danger

In the premiere episode of Season 6, Bran Stark finally reappeared after a yearlong absence from the screen. That meant nearly all the living Starks were back in the thick of the action, but the littlest Stark was still missing. Tonight, in Season 6, Episode 3, Rickon Stark returns to Game of Thrones and he's in hot water almost immediately.

After killing his father and taking over as Warden of the North, Ramsay Bolton is dealing with the other major Northern houses and catching up on everything going on at Castle Black. A man from the house of Umber tells him all about Jon Snow leading wildlings past the wall because he needs assistance fighting them. However, seeking help from Ramsay is a dangerous goal, but Umber planned for that. Umber has brought a gift to appease Ramsay without swearing loyalty to him. Two people are dragged into the hall, revealed one by one: first Osha, the wildling who cared for Bran and Rickon, and then Rickon himself. It's a major shock, and not just because Rickon is suddenly a lot taller.

Ramsay doesn't believe it's Rickon Stark at first and demands proof, which is when Umber throws the head of Rickon's direwolf Shaggydog on the table.

When Ramsay welcomes Rickon home to Winterfell, it's chilling, especially because we've already seen the Boltons hurt the Starks more than once. Whether it's Roose Bolton betraying Robb or Ramsay tormenting Sansa, the Boltons have a bad history of wrecking havoc on the most honor-conscious family in the North. That doesn't bode well for little Rickon, who doesn't even have Theon to count on to get him out of this.

As fantastic as it is to see Rickon and Osha again after such a long time, it's a more than bittersweet moment. They might be alive right now, but how long will that last? Ramsay is a straight-up psychopath who can never resist being as cruel as possible to whoever finds themselves in his path. It's going to take a lot of smarts to try and evade him, and few have been lucky enough to escape. I wouldn't count out Osha when it comes to craftiness, but overcoming Ramsay is going to be incredibly difficult.