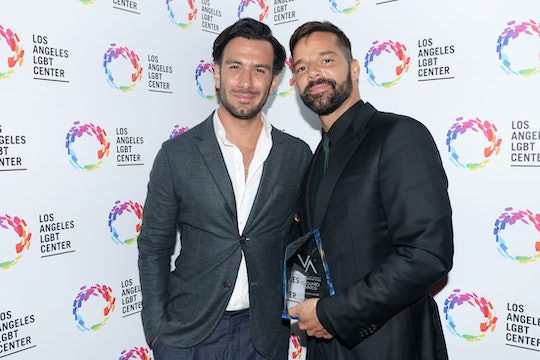 From the middle of December through the first of the year, it seems like social media feeds are bombarded with a higher-than-usual rate of engagement and baby announcements. I totally get it. Over the holidays — when people finally have some down time — is the perfect time to pop the question. Likewise, there are so many adorable options when it comes to holiday-themed baby announcements. However, one celebrity couple has taken life-changing holiday news to the next level. That's because on New Year's Eve, it was revealed that Ricky Martin and Jwan Yosef welcomed a surprise daughter.

As E! Online reported, the singer and actor took to Instagram on Monday, Dec. 31 to share some exciting news with his followers. Alongside a photo of a baby's hands grasping a pair of adult thumbs — with just the infant's bottom lips and chin visible — Martin wrote in both English and Spanish, "We are beyond happy to announce that we have become parents to a beautiful and healthy baby girl, Lucia Martin-Yosef. It has been a special time for us and we cant wait to see where this stellar baby will take us. Both her beautiful brothers and me and Jwan have fallen in love with Lucia ❤."

Yes, Ricky Martin really did keep his baby news a secret until after she was born! (What an epic way to ring in the new year, right?) Martin's followers were thrilled about his and Yosef's newest arrival. "Beautiful! Congratulations ❤️❤️," one person commented.

Yet another person chimed in with, "That’s sooo cute all the love in the world for Lucía and your family ❣️😘 that’s a special new year @ricky_martin 💖😘🙏."

In case you weren't aware, Martin already has twin boys, Matteo and Valentino, who were born in 2008, according to People. And apparently, the now-father-of-three is already a pro at fielding kid questions about having two dads. "A lot of people tell me, 'Well, you kids are on the covers of magazines and blah, blah, blah,' and I'm like, 'Yes, because I want to normalize this,'" he told Out magazine in January, 2018. "I want people to look at me and see a family and say, 'There's nothing wrong with that.' It's part of my mission." He added:

It's part of my kids' mission as well. My kids ask me about having two daddies and I tell them we are a part of a modern family. This is a beautiful sense of freedom.

Martin also opened up about his desire for a large family in January, 2018. "I want four more pairs of twins," he told E! News on the red carpet at the 2018 Golden Globes "I do want a big family, but there's a lot going on at the moment. A lot of work, wedding, so we're going to put things in order first and then we're going to get ready for many more kids." As USA Today reported, Martin revealed just a few days later that he and Yosef were already officially married.

So yeah. Clearly, Ricky Martin and Jwan Yosef are pros at keeping big life events to themselves, and then proceeding to blow fans' minds with the news. What a way to ring in 2019. Congrats, guys, on your brand new daughter!