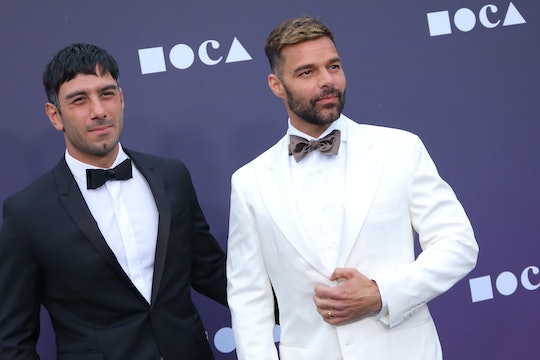 After nine months, fans are finally getting a peek at the girl who has recently taken over the "Livin' la Vida Loca" singer's life. Ricky Martin has shared the first photo of daughter Lucia, whom he shared with husband Jwan Yosef. The Puerto Rican singer announced he and Yosef had become parents to a healthy baby girl in late December.

Although the couple have shared a few photos of little Lucia before, the photo posted to Martin's social media accounts on Thursday is the first in which her face is fully visible. In the photo, Martin can be seen gently supporting Lucia as she sits on his lap, dangling her feet and legs in the air. "La luz de mis ojos," Martin wrote in the photo's caption on Instagram. According to Just Jared, the phrase translates to "the light of my eyes."

Fans were given their first glimpse of Lucia on Dec. 31, when Martin announced her arrival by sharing a photo of her tiny hands holding on to either his or Yosef's thumbs. "We are beyond happy to announce that we have become parents to a beautiful and healthy baby girl, Lucia Martin-Yosef," the singer wrote in an Instagram caption. "It has been a special time for us and we cant wait to see where this stellar baby will take us. Both her beautiful brothers, me and Jwan have fallen in love with Lucia."

Since then the singer has shared only a handful of photos of Lucia and, until recently, kept her face off camera. In January, for example, he shared a snap of himself rocking an unseen Lucia in her stroller as he got a haircut ahead of the Golden Globes. Then, in March, Martin shared a photo of Lucia (visible from only the chin down) dressed in a white pants and a shirt that read, "futura mujer radical" or, "future radical woman." In May, he treated fans to a photo Yosef had taken of him cradling Lucia, whose face is turned away from the camera, in their backyard.

According to E! News, Martin quietly married Yosef, a Syrian-born Swedish artist, sometime in 2017. The couple confirmed their marriage in January 2018, with Martin telling the entertainment news outlet, "I'm a husband!"

"We've exchanged vows, and we've swear [sic] everything, and we've signed all the papers that we needed to sign, prenups and everything," Martin continued. "It feels amazing! I can't introduce him as my fiancé. I can't. He's my husband. He's my man."

Lucia is Martin's third child, after 9-year-old twins Matteo and Valentino, who the singer is also raising with Yosef. But could there be plans for more children in the works? Martin has previously told E! News that he wanted a large family.