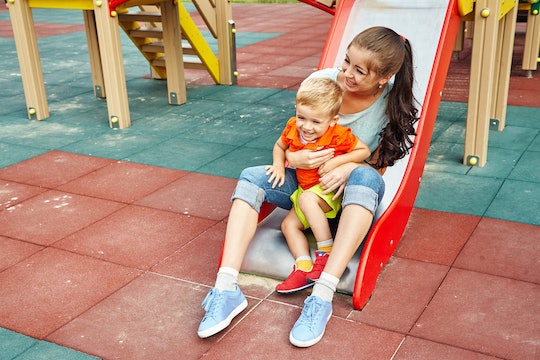 It makes for a very pretty picture: a young child rushing down a playground slide, smiling widely and clinging to a parent's lap. Unfortunately, riding slides with your kid on your lap is actually more dangerous than just letting them go by themselves. In fact, recent study found that this well-intended act could increase a child's likelihood of breaking his or her leg on the way down.

This new study, recently presented at the American Academy of Pediatrics National Conference in Chicago, reported that more than 350,000 American children aged 6 or younger sustained injuries while on slides between the years of 2002 and 2015, as The Daily Mail reported. Additionally, an overwhelming number of these injuries were leg fractures. Out of those injured on slides, children between 12 and 23 months old sustained the most injuries.

In addition to presenting numbers of injuries, the study also explained how the majority of these injuries occurred. In most cases, the children's bones were fractured when the child's foot got caught on the side or bottom of the slide, then bends or turns backwards while the child is sitting on a parent's or caregiver's lap.

The study's lead researcher, Charles Jennissen out of the University of Iowa Carver College of Medicine said in a statement to Science Daily that parents are going down the slides with their children with the best of intentions:

Many parents and caregivers go down a slide with a young child on their lap without giving it a second thought. And in most cases I have seen, the parents had no idea that doing so could possibly give their child such a significant injury. They often say they would never have done it had they known.

According to Science Daily, Jennissen also explained that the adult's size and weight greatly increases the potential for injury. Think about it: When a young child goes down the slide alone, he or she is unlikely to become injured severely even if his or her foot catches because the weight and force of the child is much less intense. Conversely, when an adult joins a child down the slide, a much greater force is generated. In that case, Jennissen said that a child's foot or leg bones are much more likely to be broken.

According to The Mirror, researchers from this study recommended that children go down slides alone. If parents do insist on riding with them, they should use "extreme caution" to prevent any potential injuries, they told the outlet.

For many parents, this report may seem to contradict instincts for playground protection. Afterall, the National Safety Council reported that slides are among the most dangerous pieces of equipment that can be found on a playground. A frightening study by the Centers for Disease Control and Prevention found that emergency departments see more than 20,000 children per year for playground-related traumatic brain injury. All of this is not to say that you and your children should avoid going to the park — just that you should be careful.

So, aside from staying on the ground while your children play on the slide, how can you reduce their risk of injury? Safe Kids Worldwide provides a list of recommendations for safe playing. While some of them are common sense suggestions — such as, keep and eye on your children — some of them are worth reiterating. For example, big and small children play differently. It is important to ensure that your child is at an age-appropriate play place with the correct type of equipment and ground cover depending on whether he or she is walking or crawling.

It is also wise to check that your playground of choice has been recently inspected by maintenance professionals for safety and upkeep. If you notice any hazards, Safe Kids Worldwide recommends that you should not allow your child to play there and report the issue to the appropriate parties immediately.

Having knowledge about these safety concerns should not deter you from enjoying a nice day outside with your children at the playground. Rather, it should provide parents with the important information they need to make a day out at the park as safe and enjoyable as possible for everyone.