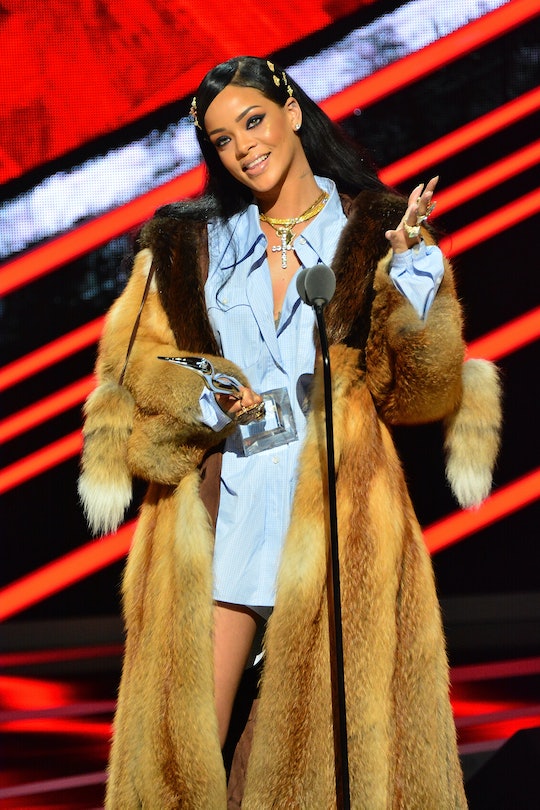 Rihanna's Performance At The VMAs Spans Her Entire Career

Beyoncé may have Lemonade videos in a whopping 11 categories at tonight's 2016 MTV VMAs, but Rihanna is set to be the belle of the ball. Not only is she taking home the Moonman equivalent of a lifetime achievement trophy — the Michael Jackson Video Vanguard Award — but she's also set to perform "several songs throughout the show." Among them was the opening performance, which is a huge honor in itself, and which she teased a tiny bit on Twitter in the days leading up to the show. And Rihanna's performance at the VMAs definitely delivered.

We knew she'd be teaming up with Swedish visual artist Pandagunda, whose sci-fi-infused style, coupled with reports that the act would be "extremely impactful," hinted at an Afrofuturist avant-garde performance we'd be reeling over for days to come.

"I’m really excited because she’s taken this opportunity to inject her own creativity into it," VMAs executive producer Jesse Ignjatovic told Entertainment Weekly. "I can tell you it’s going to be one of those holy crap VMA moments. She’s not playing. She’s bringing it."

And from the looks of her opening, he wasn't kidding. The opening act was a medley of "the biggest tracks of her career" — including "Don't Stop the Music," "Only Girl (In the World)," "We Found Love," and "Where Have You Been" — on a bubblegum pink backdrop.

Later, she followed up with a "Rude Boy," "What's My Name?" and "Work" medley featuring a bumpin' dancehall vibe and performers packing the stage like it was the hottest club on earth. She even had a twerk-off with her dancers that was approximately one hundred times more satisfying that anything Miley Cyrus has ever attempted on the VMAs stage.

The third set featured a darker vibe, which was appropriate, since she performed a trap medley of her more recent songs, including "Pour It Up" off 2012's Unapologetic, and "Needed Me" and "Bitch Better Have My Money" off her most recent album Anti.

Her final performance was the most contemplative of the night, performing ballad versions of "Stay," "Diamonds," and "Love on the Brain" in a gorgeous gown, just before stepping down from the stage to accept her Video Vanguard Award from (heavily friend-zoned) BFF Drake.

It's virtually impossible to shine on a night when Beyoncé is performing half her damn album, but, with such well-executed performances and the help of some very high profile lady friends (sup, Mary J. Blige, Tracee Ellis Ross, and Naomi Campbell), Rihanna pulled it off with grace.