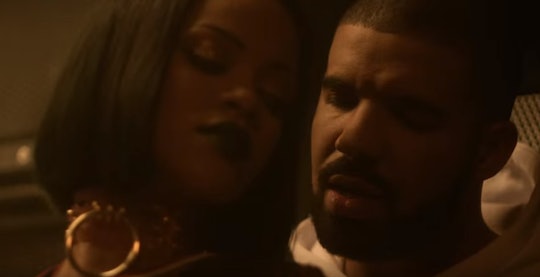 Rihanna’s latest hit single, “Work,” has become one of the biggest singles of the year, and reviews have been pretty positive overall. Still, some of her listeners felt lost listening to the lyrics. So, what had American fans and music critics so confused? Rihanna’s “Work” lyrics use Jamaican patois and Creole — and rather than applauding the obvious nod to her Caribbean heritage, some unfairly blasted the Barbados-born singer for speaking what they called “gibberish” on her single.

The futuristic single, a mix of techno and dancehall, is one of the most popular singles on Rihanna’s new album, Anti, according to Billboard magazine. “Work” is Rihanna’s 14th song to take the number one spot on Billboard’s Top 100 list, breaking her tie with Michael Jackson for the third-most number one singles. Only The Beatles and Mariah Carey have more hit singles, Billboard reported.

Rihanna teamed up with Drake for the single and video, mixing an old-school Jamaican dancehall beat and hypnotic lyrics to create a smash hit that feels more reggae than crossover pop. It wasn’t a particularly surprising choice for Rihanna; the singer has leaned on her heritage before in some of her biggest fan favorites. Her 2005 hit “Pon the Replay” and her 2011 single “Man Down” were both hit songs inspired by Rihanna’s Caribbean roots.

And while bringing fans the sounds she grew up with has helped Rihanna deliver several of her most popular club anthems, the songs themselves aren’t perfect — and they aren’t meant to be. Rihanna explained her use of Jamaican dialect in her recent interview for Vogue magazine’s April 2016 cover story:

You get what I’m saying, but it’s not all the way perfect. Because that’s how we speak in the Caribbean.

Still, the connection was lost on several music critics, resulting in some pretty unfair negative reviews. Here’s an excerpt from a particularly scathing article on “Work” posted on TheGizzleReview.com:

Not surprisingly, Twitter users were even less forgiving in their responses:

But the lyrics really aren’t gibberish at all. According to Genius.com, Rihanna repeats phrases in “Work” like “me haffi” (which means “I have to”), “when you ah guh” (or “when are you going to”), and “me no cyar” (or “I don’t care). Those aren’t gibberish at all, but basic phrases in a West Indian dialect that mixes English and African influences. Here are all the “Work” lyrics with loose translations of Jamaican patois, as reported by Black Girl With Long Hair:

He said me haffi (He said I have to)

When you ah guh (When are you going to)

Nuh body touch me you nuh righteous (Don’t touch me, you’re not righteous)

I believed all of your dreams, adoration

You took my heart and my keys and my patience

You took my heart on my sleeve for decoration

You mistaken my love I brought for you for foundation

All that I wanted from you was to give me

Something that I never had

Something that you’ve never seen

Something that you’ve never been!

But I wake up and act like nothing’s wrong

He said me haffi

He see me do mi

So me put in

Rihanna isn’t the first to bring a West Indian dialect to American listeners. Of course artists like Bob Marley and Sean Paul come to mind, but more recently Kanye West and even Kendrick Lamar have used Caribbean dialects in their music. Still, Rihanna might be the first singer in recent years to face such a backlash for doing so.

Whether the “gibberish” accusations are actually rooted in prejudice against cultures found outside the United States is open for debate. But it’s clear that Rihanna’s new single is a hit with fans — especially if they truly get where she’s coming from.