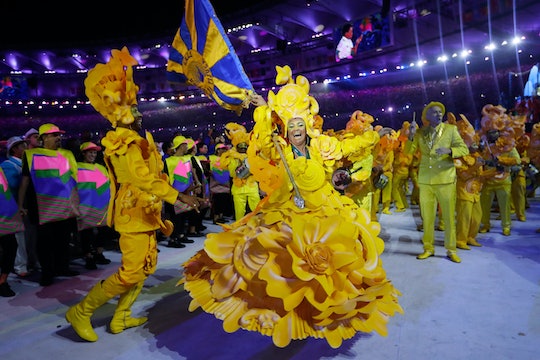 Rio is famous for their Carnival celebrations, which typically occur in February every year. Given its rich Brazilian tradition, it's not surprising that the Rio Olympics opening ceremony included carnival costumes – and they looked amazing. During an event as fun and lively as the opening ceremony, it makes sense that such a fun and exciting costume would be present at the event. The costumes didn't go unnoticed, as Twitter users obviously realized that the costumes were amazing and beautiful.

According to Rio.com, one of the cornerstones of the Carnival festival is the costumes. The lavish outfits are meant to embody the spirit of the celebration and of Brazil. Participants are encouraged to make their costumes colorful and extravagant. With the Rio Olympics being the first in South America, according to the Miami Herald, that's certainly a cause for Carnival-like festivities – and Rio certainly delivered after the Parade of Nations. The ceremony was long and full of costumes and outfits from other nations, but perhaps these were the most eye-catching of them all. Compared to blazers and boat shoes, these certainly scream fun.

Here are some photos of the lively costumes. You certainly can't miss them — and who would want to? It's Brazil's time to shine, and shine they did.

Although the ceremony was a bit sleepy — you can only be excited about so many people walking around a circle for hours — the costumes made you forget how much of a snooze the last four hours of your life kind of were. Remember when Gisele walked across the stage? No, that's OK — because you're thinking about those fun costumes. How about when that one team waved at the camera. Who, you ask? Don't worry about it — just enjoy the carnival costumes.

It's not surprising that Rio had these carnival costumes at some point throughout the show, but that's OK if it's predictable. It's the Olympics — a lot of things were going to be predictable. At least this was a predictable, pretty thing.