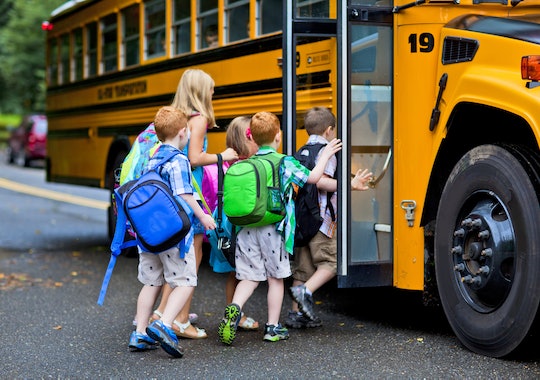 Take-home report cards have become a stable of the education systems as schools try to keep parents informed about their child's progress. But, for some kids, report card day can lead to more than a lecture about bad grades. According to a new study, the risk of child abuse climbs after kids get their report cards. What's noteworthy, though, is that researchers only found this link when report cards were given out on Friday.

The study was published in JAMA Pediatrics on Dec. 17, 2018, focusing on children ages 5 to 11. As explained by The New York Times, researchers relied on reports called in to the Florida Department of Children and Families abuse hotline during the 2015 and 2016 academic year.

Researchers were curious to know if report cards in general were a precipitant to child abuse. They found, according to the study's abstract, that release of report cards on Monday through Thursday was not associated with any increased incidence rates of child physical abuse on the same day or the day after the release.

However, after a Friday report card release, researchers noted in the study's abstract that they saw a nearly 4-fold increase in the incidence rate of verified child physical abuse reports.

The study's lead author, University of Florida psychologist Melissa Bright, explained to CBS News that "anecdotally, we know a lot of parents will spank their children or use corporal punishment if they're unsatisfied with their school work." Corporal punishment may become abusive when kids don't have school the next day and injuries are more likely to go unnoticed, as noted by CBS News. According to the news outlet, Bright also proposed that severe punishment is less likely on weekdays because parents are too busy to focus on report cards.

This is not the first time that advocates have voiced their concerns about a possible link between report cards and child abuse. In 1990, school officials in Boston sent companion letters with report cards to try curbing child abuse. Not too long after, as reported by Fatherly, Maryland created the Public Education Task Force to Prevent Child Abuse and Neglect.

A 1991 article in the Baltimore Sun noted the committee was "founded on the growing evidence that the incidence of child abuse increases at report card time".

Advocates began referring to the issue as the "report card reflex", as noted by Daily Times. In 1992, a New York Times article noted the National Committee for Prevention of Child Abuse, a Chicago group, conducted a national awareness campaign with advertisements that read, "Stop the Report Card Reflex".

The study does have its limitations and researchers could not definitely say that report cards were the direct cause of abuse, as reported by U.S. News & World Report. More studies should be done with a larger sample, to widen data to include private schools and home-school programs, as noted by the outlet.

Overall, further studies would need to be conducted to really nail down a possible link. Still, this study raises good points about possible policy change. The authors concluded, in the study's abstract:

To the extent that children who receive poor report cards are punished by their caregivers and that this punishment sometimes crosses the line to physical abuse. Several school district-level or state-level policy changes could be made to reduce the likelihood of physical abuse.

The study also raises good points about confronting the use of corporal punishment. The American Academy of Pediatrics released a policy statement on corporal punishment, advising parents that they shouldn't spank their children because it's harmful and ineffective.

Dr. Robert Sege, a Boston pediatrician and Tufts University professor of medicine, told CBS News, "There's no place for corporal punishment for school failure because it doesn't work and misses the point."

Hopefully, further studies will be conducted so school officials can better understand what link may exist between report cards and child abuse. That way, they can create better policies.