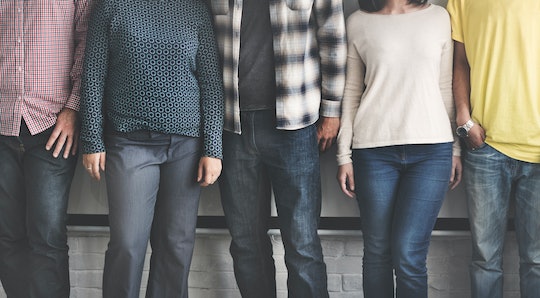 Most young people don't worry too much about their cancer risk, because cancer always seems like something that only older people get. This isn't true, of course, and there are some cancers that are more likely to strike young adults and even kids. But now, researchers have found that a cancer that was believed to mostly affect those over the age of 50 has been spiking in young adults. The risk of colon and rectal cancers is skyrocketing in millennials, and here's how you can protect yourself.

If your parents are in their early to mid 50s, you've probably heard them complain at least once about having a colonoscopy. After the age of 50, adults are advised to undergo the exam — which isn't so bad in and of itself, but the required preparation can be uncomfortable — in order to look for the early signs of cancer in the bowel. Colon cancer is the third most diagnosed cancer in men and women in the U.S., according to the American Cancer Society, and screenings like colonoscopies are part of the reason why so many cases can be diagnosed — often when the cancer is still treatable. Although the cancer is predicted to cause over 50,000 deaths in the U.S. in 2017, that number has been trending downward for decades thanks in part to routine screenings and an increased awareness.

That being said, most people still think that it's a cancer that mostly strikes older people, but new research shows that there's been an alarming rise in the number of colon and rectal cancer cases in people under the age of 50, particularly among young adults. The American Cancer Society found that now, 3 in 10 rectal cancer diagnoses are in people under the age of 55.

When the society looked at trends, it found that even though the cancer rate has gone down in the population that gets those regular (if slightly inconvenient) screenings, the rates of both colon and rectal cancer have actually been going up at a rate of 1 to 2 percent over the last decade in people in their 20s and 30s. The research lead, Rebecca Siegel, MPH of the American Cancer Society, said of the study's findings:

Trends in young people are a bellwether for the future disease burden. Our finding that colorectal cancer risk for millennials has escalated back to the level of those born in the late 1800s is very sobering. Educational campaigns are needed to alert clinicians and the general public about this increase to help reduce delays in diagnosis, which are so prevalent in young people, but also to encourage healthier eating and more active lifestyles to try to reverse this trend.

There are a number of risk factors that may lead to someone to be diagnosed with colorectal cancer at any age, and as this research points out, it's never too early to develop healthy habits to help prevent it. The American Cancer Society advises that individuals maintain a healthy weight, get regular physical activity, avoiding smoking or drinking large amounts of alcohol, and eat a well-balanced diet with plenty of fiber from fruits, veggies, and whole grains (which are good for bowel health). They also advise people to avoid eating a diet that's dominated by processed meats, which some studies have shown could be linked to developing colorectal cancer and other bowel disease.

If someone in your family has a colorectal cancer or inflammatory bowel disease, you may be at a higher risk. When you visit your doctor, be sure to clue them in to your family's medical history, as they might want you to get screened earlier. If this latest research is any indication, the guidelines for screenings may be subject to change if additional studies also indicate the rate of these cancers are on the rise. In the meantime, as they say, an ounce of prevention is worth a pound of cure — so building healthy habits while you're still young isn't just helpful to stave off disease now, but guard yourself against longterm risk for a wide variety of health conditions, including cancer.