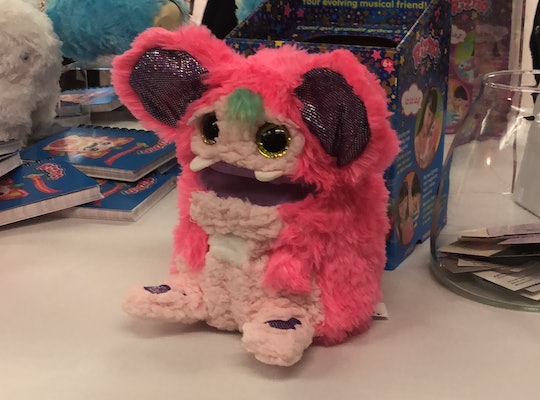 The Rizmo Toy Is What Happens When You Mash Up A Furby, Tamagotchi, & Hatchimal

A cute, fluffy, singing toy is arriving in stores later this week, and it could be this generation's version of the Furby. Rizmo, an interactive musical toy, is going on sale this weekend, and it looks like kids everywhere will adore this alien creature. If your kid enjoys interactive toys, then this one is almost certainly going on the holiday wish list, and it could very well become the top holiday toy for 2019.

Launching on September 14, 2019, Rizmo will be on sale both in stores and online for a retail price of $60. Retailers that carry Rizmo include Target, Best Buy, Barnes & Noble, Books A Million, Seventh Avenue, and Amazon. Rizmo is a new product from the innovative toymaker Tomy, which is also responsible for the Club Mocchi-Mocchi, Ritzy Rollerz, and Adorbs lines of toys.

Available in Berry, Aqua, and Snow shades, (essentially pink, aqua, and white, respectively), each Rizmo also has a favored style of music, including pop, hip hop, rock, or electro. The exact type of Rizmo you get is a bit of a mystery, so picking one out and watching it grow is part of the fun. Each one starts out as a little fluff-ball creature that "evolves" into its final form over time as your kid plays with it. Play with and nurture it when it's a baby (aka ball) until it's tail pops out. From there you have to interact with it more for it to fully evolve. Once fully grown, the Rizmo can record and play back songs, mimic music instruments, play games, and even hold a dance party. Colorful, cute, and musical, this toy is sure to be a hit for plenty of kids.

To help spark your kid's imagination, the Rizmo has a pretty detailed backstory. There's an in-depth, three-part video series about the Rizmo's origins on its website, complete with footage from newscasters and dance numbers. (Seriously, check it out, but be warned that the jingle is going to get stuck in your head faster than Baby Shark.) In the video, the Rizmos crash down to Earth from outer space in search of music and playtime. Your kid's interactions help it grow and evolve. It's sure to be the most adorable creature from outer space you bring home.

For a toy that's so new to the scene, Rizmo is already generating a lot of buzz. "Our team got to see Rizmo early on and it instantly put a smile on our faces," said Laurie Schact, Toy Insider Mom, in a press release for Tomy. "On top of it filling a void in the industry, the fact that it evolves means it will keep kids engaged and interacting with it for hours and hours." No other toy provides quite the same interactive experience. "We have identified a unique play pattern that differentiates Rizmo from the competition with the first-ever toy that truly evolves," said Pete Henseler, president of Tomy International. By combining big trends in the toy aisle such as virtual pets and interactive plush, Rizmo just might become the hottest toy for the 2019 holiday season. Don't be surprised when this fluffy, funny, song-and-dance obsessed little alien lands right at the top of your kid's holiday wish list.