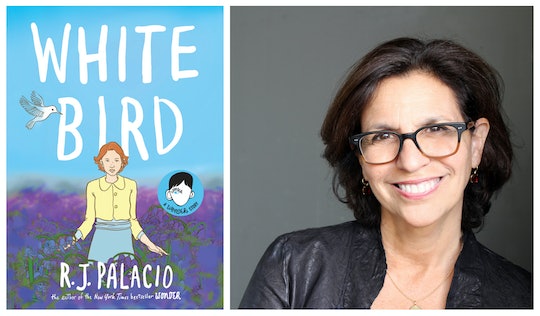 The Children's Author-Illustrator Taking On The Holocaust — EXCLUSIVE LOOK

R.J. Palacio's 2012 middle-grade novel Wonder, about a fifth-grader bullied for his a facial disfiguration, and the friends who would defend him, became an instant classic. Drawn from an incident in Palacio's own life as a mother, the book inspired an entire generation of kids to be kind — there is a 2017 film adaptation. There are companion books, which have each been successful in their own right, paving a path for her to continue to write within that universe. Palacio's latest book, White Bird, a historical graphic novel that she wrote and illustrated about the Holocaust, is a bit of a departure, then, from the fêted world of U.S. middle school, though there is an important link.

White Bird tells the story of Sara, a Jewish girl living in Nazi-occupied France. Forced into hiding, Sara's only lifeline is Julien, a boy she sat next to in school, but never got to know — in part because he is disabled and ostracized. Wonder fans will recognize the themes of kindness, bravery, and friendship that shine throughout White Bird, which Palacio says are absolutely relevant today, in a phone interview with Romper, touching on the difficulties of educating kids about the atrocities that took place in the lead up to and during World War II. She also shares a peek inside, and details about the White Bird book tour, for which Romper has the exclusive.

Get ready for feels: this book and Palacio's beautiful message are coming at you October 1, 2019.

Raquel Jaramillo, aka "R.J. Palacio," was working on a different novel when the 2016 election shocked the nation. She had been able to shut the world out and sit bent over her computer writing novels, but "after the election, though, I found that I just couldn't do that anymore," Palacio tells Romper. "I needed community. I needed to be part of it. I needed to sort of see what was going on and and become involved in our political process."

Palacio has always been an artist — she worked in publishing in art direction before writing Wonder — and her need to keep her head up and involved in the world around her made drawing and illustrating more appealing. The story of White Bird was always imagined visually, so it all sort of fell into place, as she tells it. Exploring Vichy France allowed her to sketch, engage in conversation, and process the news of the present day, in some way — to use a historical proxy to understand the unthinkable things happening in her own time. And herein is her great twist.

White Bird's Sara is better known to Palacio aficionados as the character Julian's "Grandmere"; the seed of her story exists within the pages of Auggie & Me.

Julian is Auggie's bully in Wonder, and Palacio never lets him off the hook for his unkindness, but she gives him room to grow and do better. Part of his growth is hearing his grandmother's story of when she was a young girl in France. Below, we have an exclusive sneak peek of the first part of White Bird, which connects the dots between the worlds of Wonder and White Bird.

Palacio went to that George Santayana quote ("Those who cannot remember the past are condemned to repeat it.") over and over in her mind. She knew she wanted to write Grandmere's story one day, and a relation — her husband's uncle, who works as an elementary school principal — told her that the story would be a great first introduction to the Holocaust for younger children, such as fourth and fifth graders, who might otherwise learn about the Holocaust later in school. While she had no immediate plans to write the story back when Auggie & Me published, the election made it suddenly more necessary in Palacio's eyes. "When the elections happened and and right away we started hearing about Muslim bans and round-ups of immigrants and the targeting and dehumanizing of Mexicans and people south of the border. I started thinking, 'Hey, you know, this has happened before. I see the connections.'"

Palacio's first introduction to the Holocaust was The Diary of Anne Frank, and she admits unpacking the issue of Jewish and Holocaust representation in literature for kids is tricky: Parents likely want to shield their children from the atrocities committed, but she also knows that for Jewish children, there is not one single introduction to the Holocaust — they learn of it from their earliest days as a sort of collected memory or inherited trauma. This was the case with Palacio's husband, who is Jewish and who has relatives that did not survive the Holocaust.

But in the spirit of the "Never Again" and #WeRemember movements, it's crucial that young people grow up with a knowledge of the troubled past. Palacio hopes that White Bird can serve as a gateway to kids to learn and discover more about history — as well as with current events.

On the flipside, there are issues with Holocaust literature being the only Jewish representation taught in schools. Many Jewish people in the children's literature industry are hoping for a wider array of Jewish stories. Of course stories of anti-semitism and the Holocaust are important—but for Jewish children, and non-Jewish children alike, stories with triumphant and joyful Jewish characters that don't center on trauma are much less prevalent. Beyond that, there is a lot of emphasis on works of children's literature classified as #ownvoices, which means that the author is writing about and from a marginialized identity and perspective.

Palacio acknowledges this push. She received a lot of critical scrutiny for writing the disabled character of Auggie in Wonder, not being disabled herself. She says she had no idea when she wrote it just how big the book was going to be, and acknowledges the criticism in the author's note. "I did talk about that in the [author's note] because I'm very conscious of the fact that we're in a world in which own voices is a very important aspect of literature, and I need to respect that."

The flipside is that Palacio doesn't think the weight of sharing a narrative should fall on those who suffer the trauma alone. "This is the kind of thing for all of us to talk about," she says. "Just like racism isn't just for black people to call out. It's on all of us."

The book's various appendages, and of course the text itself, all encourage kids to keep digging. To keep thinking about and responding to our history as well as our current events. Palacio brings the discussion full circle in White Bird. She imagines what a survivor of the Holocaust would feel seeing footage of ICE detention centers.

And she's open to discourse. Palacio is going on an international book tour for White Bird — and hopes to see and discuss the book with readers at the tour stops listed below:

"I'm really excited about this one, given the nature of the book," she says. "And also I know that that I'm hopefully bringing this sort of message out to readers."

Like Wonder, the themes of friendship, forgiveness, and kindness resonate in White Bird, and Palacio takes her role as storyteller very seriously. Stories can teach deepen our empathy and understanding. They build bridges. They start conversations. Hopefully, with White Bird, young readers will want to keep reading.

White Bird: A Wonder Story by RJ Palacio publishes on October 1, 2019, and you can preorder it now.