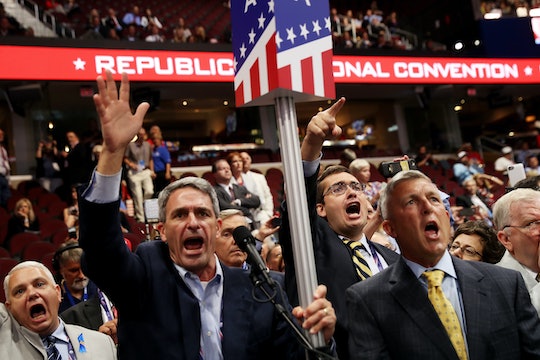 RNC Roll Call Vote Shut Down: What You Need To Know

It only took a few hours on the first day of the Republican National Convention in Cleveland for everything to erupt in chaos. As anti-Trump delegates made a last ditch effort to keep presumptive Republican presidential candidate Donald Trump off the ballot, RNC officials shut down demands for a roll call vote, triggering uproar in the crowd and effectively ending the Never Trump movement. The denial of a roll call vote makes it impossible to free delegates from Trump. Here’s what you need to know so far.

In the days leading up the Republican convention, anti-trump forces had been preparing one final attempt to block Trump as the Republican party’s presidential nomination by trying to convince delegates to vote their conscience, which would hopefully change convention rules that bind delegates to back Trump, which were written last week by a convention committee.

On Monday afternoon, Arkansas Rep. Steve Womack took the stage and brought up the newly proposed rules, which pro-Trump supporters fiercely shouted down and he left the stage. Moments later, amongst cheers and boo's, Womack returned to the stage and called for a voice vote. Both “Ayes” and “Nays” from the crowd could be heard, which Womack ruled those in favor of the rules package had won.

Trump supporters loudly chanted “U-S-A!” as Trump critics booed and demanded for a recorded vote, rather than one by voice. This ruling caused an uproar of chaos on the convention floor, so here's a bit of background on how all of this happened.

Who's Behind The Rules & How They Work

What Happened This Election Season

Things got a bit heated in the party back in May after Trump locked down enough delegate votes for a presidential nomination and not every Republican delegate was on board with the business. Leading up to the this year’s convention, the Never Trump movement was started within the Republican party in an effort to “unbind” the convention’s delegates from Trump and to be able to vote for whoever they pleased, regardless of which candidate won in their state’s primaries.

Why A Roll Call Vote Was Shut Down

Delegates behind the movement came from nine different states or territories — Colorado, Washington state, Utah, Minnesota, Wyoming, Maine, Iowa, Virginia and Washington, D.C. — and even though backing from seven states or territories were thought to be enough to force a roll call vote, three states (it's still unclear which ones) had withdrawn their support. This news ultimately shut down the movement’s efforts on Monday after an emphatic voice vote from the crowd approved the rules.

The way ruling structure works now basically guaranteed Trump as the Republican party’s presidential nomination many months ago after he won over enough states during the primaries.

This move by those delegates who oppose the billionaire as their candidate so much that they want to change the convention rules highlights a truly strong division that Trump has ultimately brought to the Republican party.