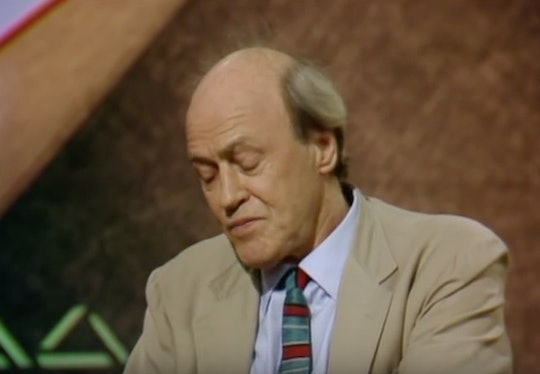 I thought I'd read all of Roald Dahl's stories while growing up, but as it turns out, I missed one crucial piece of writing by the now-deceased British author. If there's one piece of Dahl literature all parents should read, I'd argue that it's not The BFG, Fantastic Mr. Fox, or Charlie and the Chocolate Factory. Instead, it's a short, heart-wrenching piece Roald Dahl wrote about his daughter's measles in 1986 — three decades before the anti-vaccination movement became what it is today.

In the essay, published on the Roald Dahl website dedicated to his museum and charity, Dahl wrote:

Olivia, my eldest daughter, caught measles when she was seven years old. As the illness took its usual course I can remember reading to her often in bed and not feeling particularly alarmed about it. Then one morning, when she was well on the road to recovery, I was sitting on her bed showing her how to fashion little animals out of coloured pipe-cleaners, and when it came to her turn to make one herself, I noticed that her fingers and her mind were not working together and she couldn't do anything.

Dahl asked Olivia if she was feeling alright.

'I feel all sleepy,' she said. In an hour, she was unconscious. In twelve hours she was dead.

Olivia's measles had turned into measles encephalitis. In 1962, Dahl didn't have the option of vaccinating Olivia. "On the other hand," he wrote, "There is today something that parents can do to make sure that this sort of tragedy does not happen to a child of theirs. They can insist that their child is immunised against measles."

Dahl also spoke, indirectly, to any children who could be reading his essay. "All school-children who have not yet had a measles immunisation should beg their parents to arrange for them to have one as soon as possible." Dahl then ended his essay by circling back around to Olivia:

I know how happy she would be if only she could know that her death had helped to save a good deal of illness and death among other children.

When Dahl's young son Theo suffered from fluid buildup in his brain after an accident, Dahl spent a year creating a valve that would effectively drain it. (It was called the Dahl-Wade-Till valve, and it eventually helped nearly 3,000 children.) Dahl couldn't help his daughter. In Dahl's biography, author Donald Sturrock quotes Dahl's wife at the time, Patricia Neal, saying, "He did not talk about his feelings... did not want to talk about Olivia."

But in his short, heartfelt plea, Dahl did open up and talk about Olivia, in the hopes of persuading people to vaccinate their children. As The BFG regains popularity when it takes the big screen, remember who the book was dedicated to and why. The more the world can share Dahl's story, the bigger impact it will hopefully have — using Dahl's storytelling for a truly important cause.