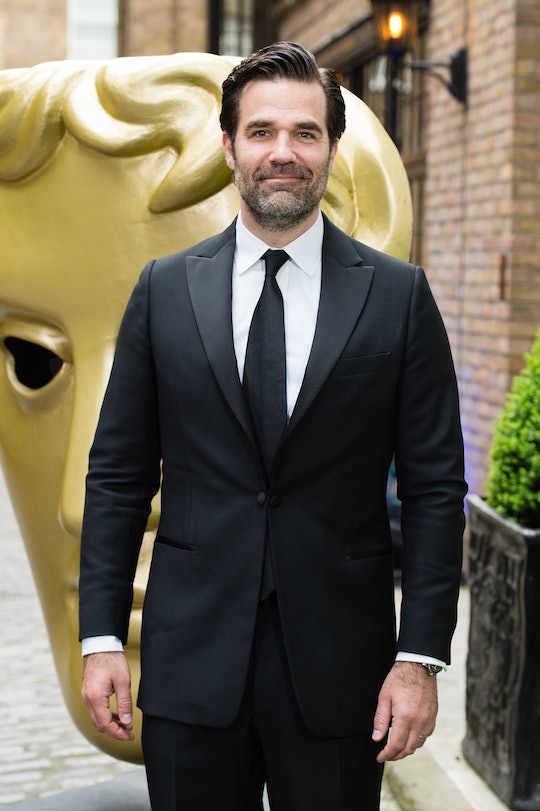 In February, Catastophe star Rob Delaney shared a personal update that has to be every parent's worst nightmare: his 2-year-old son, Henry, had passed away from cancer a month prior. In a Facebook post, Delaney explained that Henry had been diagnosed with a brain tumor in 2016, and after "living in hospitals" for 15 months, and developing "significant physical disabilities" as a result of surgery, Henry eventually came home, then died in January. The loss has naturally left Delaney, his wife, Leah, and their two older sons completely devastated, but fans are buoyed by a recent update in which Rob Delaney announced he and his wife are expecting a baby. Just as he did when he revealed that Henry had died, Delaney used the announcement as an opportunity to help others — in this case, to push for universal health care in the United States, and to support the Democratic Socialists of America's Medicare for All campaign.

Delaney's pregnancy announcement seems like some very much-needed happy news for a family who has endured such a huge tragedy, but his announcement was shot through with the knowledge, through the treatment of Henry's cancer, that health care is everything to families. As an American living in the UK, Delaney has not only experienced both countries' approaches to health care, but has learned firsthand what it's like to have a child with a terminal illness requiring extensive medical support.

And now, he's again experiencing what it's like to expect a baby within the framework of Britain's publicly-funded National Health Service, or NHS.

In a video filmed for the Medicare For All campaign, Delaney encouraged all Americans to support H.R. 676, which is a bill that was introduced into United States House of Representatives to establish a universal single-payer health care system in the United States roughly similar to the NHS. In the clip, Delaney sticks to his signature hilarious style, but he's definitely not joking around when it comes to the subject matter. Explaining that Henry's illness gave him "a pretty good perspective" on the differences between the two systems, Delaney said, "We had a couple kids in the U.S., and we had one child here in the UK, and we're about to have another. And now I know, unfortunately, that things can go very wrong. And so I don't have the attitude like, 'Oh, it won't happen to me.' Because it did happen to us. Our son, Henry, passed away in January of this year from cancer."

Delaney gushed about his "beautiful little boy," in the emotional clip, and noted that both Henry, as well as Delaney and his wife, benefitted "so much" from the British health care system. While he said that they "endured stress that was truly unbelievable," he explained that they didn't have to experience the added burden of worrying about how they were going to pay for it all. And, for Delaney — and countless other families in single-payer systems — that difference was a big deal.

Noting that he knows people who have had to sell their house to afford life-saving medical treatment, or take other "drastic measures," despite the fact that it's pretty much a guarantee that everyone is going to need health care eventually, Delaney said it was "a gift" that in the UK that funding medical treatment is not something anyone has to consider. What's more, Delaney argued that the current approach to health care in the United States is unnecessarily expensive and totally ineffective:

"In between you and your health care is how many insurance company employees trying to ensure that you don't get [what you need] while they collect premiums through the nose that don't even go to health care? I mean, where do they go to, like weird ads and stuff? Get rid of all that, save untold millions — I'm sorry, billions — and have healthier people. Come on!"

Although political support for a single-payer system during the passage of the Affordable Care Act seemed slim, it's an arrangement that makes a whole lot of sense to people who live in the U.K., Canada, or any other country with a similar system.

Delaney's video is certainly far from the first time he's expressed his immense gratitude to the NHS: in his February post in which he announced Henry's death, Delaney wrote that "the NHS nurses and doctors and the home carers and charity workers" who helped him and his family would be his "heroes until the day [he dies]," and urged anyone wishing to send condolences to his family do so in Henry's name to the UK-based charities Rainbow Trust and the Noah's Ark Children's Hospice. But he also encouraged his followers in the UK not to take the health care system for granted, and instead to "take concrete and sustained action to support the NHS."

As far as celebrities go, Delaney is very protective of his private life. In general he doesn't share much about his family, and in a hilarious video from 2012 that announced the release of his latest stand-up comedy special, he introduced a woman who appeared to be Leah, before eventually pointing to her and saying, "not my real wife... I would just never put my real family on a camera. Because you people are monsters — unless you buy my special."

While not much seems to have changed in his desire to keep his family out of the limelight since then, it's clear that Henry's death — as well as his new baby on the way — has inspired Delaney to speak out, and push for health care as a right, instead of as a privilege given only to those who can afford it. Because, as Delaney's own experience proves, when things go wrong, universal health care means being spared the burden of additional pain and financial stress. And when they go right, and you get to welcome a new life into the world? That same health care system means you're able to be treated as a patient deserving of respect, instead of as a customer left to navigate medical bills and insurance claims.

While you never get over the pain of losing a child, Delaney has shown that he wants the memory of his son to help other families, and that he knows what's at stake.