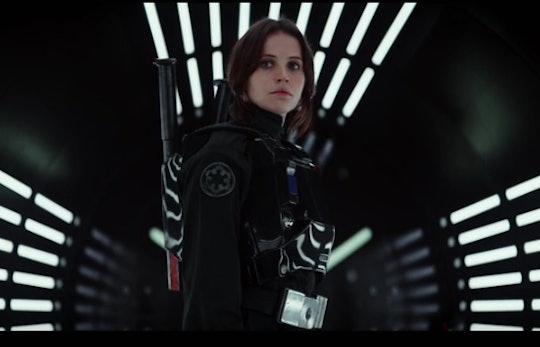 ‘Rogue One’s Female Lead Is Upsetting Some Star Wars Fans, But They Need To Get Over It

We’re about eight months away from the premiere of Rogue One: A Star Wars Story, and fans are getting pretty pumped. Well, some fans, anyway. While most of us — yep, avid Star Wars geek over here — have been excitedly pulling apart every possible nuance packed in the two-minute Rogue One trailer released on Thursday, others have been busy venting online about the movie’s casting. The problem, according to the nasty comments that surfaced on Twitter Thursday morning, is that Star Wars Rogue One has a female lead — an idea that some male fans found thoroughly unacceptable.

To back up a bit, the plot of the newest movie in the Star Wars franchise takes place sometime in the 20-odd years between Star Wars: Revenge of the Sith (Episode Three) and Star Wars: A New Hope (Episode Four). According to The Telegraph, the plot centers around the Rebellion’s plan to steal schematics for the Death Star. And while we all know how that mission must have ended, it’ll still be exciting to see actress Felicity Jones as heroine Jyn Erso, a career criminal tasked by the Rebels to lead the mission. According to the official movie trailer, Erso seems uniquely suited to the task, with prior crimes including “forgery of Imperial documents, possession of stolen property, aggravated assault, and resisting arrest.”

Now, as a complete Star Wars junkie, I have my own ideas about who Jyn Erso might be and whether her character is somehow connected to Rey’s character in The Force Awakens. But, like the movie she stars in, the Erso character is clearly meant to stand alone (for now, at least) as a story of bad*ss female empowerment among the Rebel ranks. And that’s exciting. I mean, possible family lineages and midi-chlorian counts aside, what the two latest movies certainly have in common is a clear commitment by the filmmakers to elevate the role of women in the Star Wars universe.

Before Episode Seven came out in 2015, female fans of the franchise had one significant female character to cling to. One. Princess Leia Organa — whose first scenes involve her awaiting rescue — eventually becomes the glue holding the Rebellion together. If you watch the original Star Wars trilogy, it’s pretty easy to conclude that Organa was the only woman left in the universe. Later movies attempted to add Organa’s mother Padme Amidala to the list but, despite being an influential senator and skilled diplomat, Amidala’s major function was to marry the guy who became Darth Vader, then to die while giving birth to the Skywalker twins.

But the idea that female characters could do more than get captured, give birth, or die seemed to be too much for some male fans. Just take a look at these comments on Twitter:

One of the most inappropriate comments reportedly came from New York Post columnist John Podoretz who tweeted:

Imagine a future in which a ‘Star Wars’ movie has a male protagonist. Go ahead, imagine it. You’re not going to get one.

Podhoretz has deleted the tweet, but not before it was captured in a screenshot in this Bustle article. He later tweeted a weak, non-apology to fans, saying that his tweet had been meant as a joke.

But this isn’t a joke to female fans. Out of eight movies, two — only two — now have female leads. And even with the sharp visuals and incredible sequences packed into the Rogue One trailer, on Thursday the entire Internet nearly broke with attempts to define Erso and Rey in terms of the male characters in the Star Wars franchise by saying, for example, that Erso was only important because she was a male character's mother.

So no, the fact that the new Star Wars movie has a female lead isn’t a takeover. By giving a nod to female fans and moviegoers, the filmmakers seem to be giving their base credit for being able to handle diverse stories and voices. That could — and should — lead to a greater number of female voices and more characters of color in sci-fi — issues that have long been sticking points for many fans. And while I — and thousands of female fans — want to be excited for the future of the Galaxy, this backlash shows exactly why we may never really be visible in it.

But not only will we not be visible, we also will not be taken seriously unless we have some kind of connection to a strong, well-known, male character. Female characters are strong in their own right — not because they were a man's mother or daughter and not because they had sex with someone.

In what universe is having to endure two strong female characters simply too much of a threat to men? This one, apparently. And it shows just why characters like Erso are seriously necessary.

More Like This
Teachers Reveal The Go-To Movies They Love To Show In School & Why
Olivia Newton-John's Daughter Says Her Mom Was Her "Safe Place" In Lovely Tribute
Mindy Kaling Has The Chillest Response To Rumors That B.J. Novak Is Her Kids' Father
Drake Jokingly Roasted His Dad About The Tattoo He Got Of The Rapper On His Arm