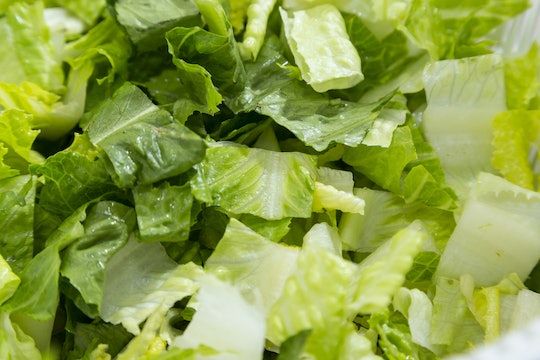 The CDC Wants You To Throw Out Your Lettuce Immediately

Attention: Drop your fork and step away from that salad. Like, pronto. Remember those romaine lettuce recalls back in October? They're back and more widespread than ever. In fact, romaine lettuce has been linked to E. Coli infections, and the CDC wants you toss yours out ASAP.

Consumers who have any type of romaine lettuce in their home should not eat it, according to the Centers for Disease Control and Prevention (CDC) website. Instead, you should throw it away immediately — even if some of it was eaten and no one has gotten sick. This includes all types of romaine lettuce — whole heads of it, hearts of romaine, bags and boxes of precut lettuce, as well as salad mixes containing romaine, Newsweek reported. (This means baby romaine, spring mix, and Caesar salad, too.) If you're not sure if the lettuce is romaine, or whether a salad mix has romaine lettuce in it, err on the side of caution and just throw it away.

Furthermore, the CDC advises consumers to go one step further by washing and sanitizing drawers or shelves inside refrigerators where the romaine was stored. You can follow these five steps to adequately clean your refrigerator. Restaurants and retailers should not serve or sell any romaine lettuce, either. (Again, this includes salads and salad mixes that contain romaine.)

The CDC urges consumers to take action if they have symptoms of an E. Coli infection by writing down what you ate in the week before you became ill. You should also report your illness to the health department, and be sure to help public health investigators by answering questions pertaining to your illness.

According to FoodSafety.gov, symptoms of an E. Coli infection include:

Symptoms typically begin roughly three or four days after ingesting the bacteria, and most people get better within five to seven days, according to the Food and Drug Administration (FDA.) Although people of any age can become infected with E. Coli, children under age 5, adults older than 65, and people with weakened immune systems are more likely to develop severe illness. It's worth noting, though, that even healthy adults and kids can become seriously ill, the FDA pointed out.

As CNN reported, 32 people have been infected with the outbreak strain across 11 states — including 13 people who had to be hospitalized. One of those who were hospitalized developed hemolytic uremic syndrome (HUS), which is a potentially life-threatening type of kidney failure. No deaths have yet been reported. So far, individuals have become sick in the following states: California, Connecticut, Illinois, Massachusetts, Maryland, Michigan, New Hampshire, New Jersey, New York, Ohio, and Wisconsin.

Considering Thanksgiving Day is just around the corner, it's especially important that family and friends are aware of this latest E. Coli risk in relation to romaine lettuce. Be sure to tell aunt Sue to skip the romaine in that salad— or to perhaps bring a different side dish altogether this year. Combined this E. Coli threat with the widespread salmonella outbreak from eating turkey, and whomever is hosting Thanksgiving this year will need to take extra precaution on Thursday. Be smart and stay safe as you celebrate the holiday with loved ones!