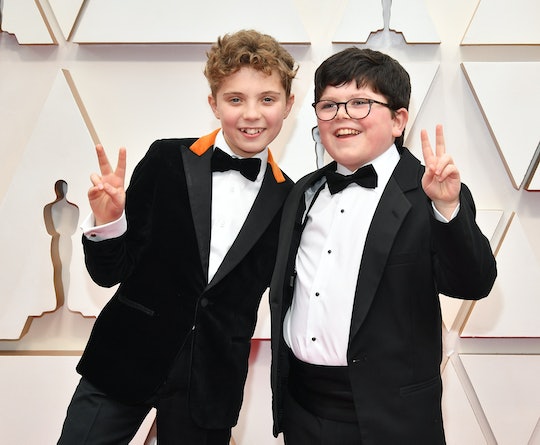 Attending the Oscars seems like such a fun and exciting experience, especially for first-timers. Jojo Rabbit stars Roman Griffin Davis and Archie Yates offered peace signs at the Oscars as an indication that they had the best time at the award show. The actors took to the red carpet before the ceremony and gave their biggest smiles, waved at their fans, and jumped for the cameras. It's gotta be a nerve-wracking night, especially for the nominees, but these two made it look incredibly fun.

When the two costars got in front of the E! cameras, they told red carpet host Giuliana Rancic that they were "excited to meet everyone" during the night, but were happiest to be by each others' side.

"You don't even know my age!" Yates replied.

The two boys revealed to the cameras that they are "almost 13" and "nearly 11" years old — but they're already red carpet pros. People on Twitter could not get over how much fun the boys were having.

It isn't every day that an almost-13- and nearly 11-year-old get to walk the red carpet, but Griffin Davis and Yates earned the honor thanks to Jojo Rabbit being nominated for six Academy Awards, including Best Picture. Griffin Davis told Entertainment Tonight in December that he had some important advice to share to other young actors: take rejection well. "It's hard work and I think if you can't take rejection, it's going to be harder for you."