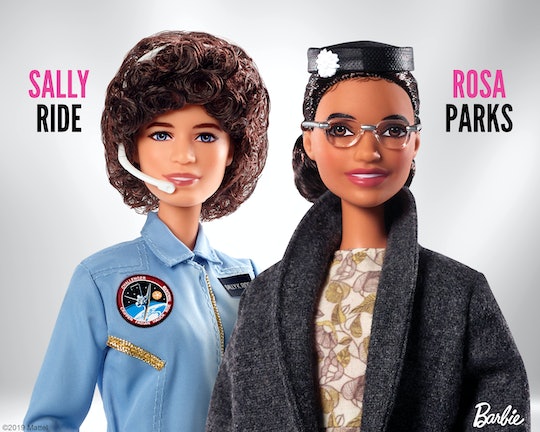 The faces of Barbie continue to evolve as the brand shifts, offering more for children than just small-waisted waifs with voluminous blonde hair and bright blue eyes. More than ever, Barbie has focused on becoming a more inspiring, inclusive brand that highlights the successes of women and the different bodies in which they inhabit. The new Rosa Parks and Sally Ride Barbies are two fantastic editions to Mattel's Inspiring Women series, which launched last International Women's Day.

Previous dolls of the Inspiring Women's Series were pilot Amelia Earhart, NASA mathematician Katherine Johnson, and artist Frida Kahlo. The dolls were designed to spotlight the accomplishments of the women while making them approachable to young children who are just learning their own place in the world through the act of play and pretend. In a press release, the team at Barbie said that their hope for these dolls is that in young femme-identifying children learning these women's stories, they can help close the "dream gap," the chasm that begins around age 5 where little femmes start having self-limiting ideas about what is and is not appropriate and achievable for them. By playing with stories of women who did astounding things, they may also feel less limited.

All of the Inspiring Women collection dolls will have unique accessories, as well as educational information about the historical figure. In the case of the first woman in space, Dr. Sally Ride, it might speak about her two space flights, beginning on her ride in the Challenger in 1983. I would hope that it would touch on how Ride became a champion of STEAM education after her years at NASA. She has a youth STEAM program named for her at the University of California, San Diego that combines her love of the arts (she had a bachelor's in English) and her obvious adoration of science.

The Rosa Parks doll feels more necessary than ever in the current political climate. Rosa Parks' name is synonymous with tenacity and justice. She affirmed her right to be present and take up space during a period of time when it was not only legal, but encouraged for black people, especially black women, to be treated as secondary citizens (and often much worse) and not given any consideration regarding their health or comfort. Parks made it known that she was at her limit of being dismissed in such a manner, and it is my hope that the children who interact with her doll will feel even a tenth of her eagerness surrounding justice for black people.

The new Rosa Parks and Sally Ride Barbies are a call to action from the maker of a line of dolls that can often be seen as antiquated or anti-feminist. Critics point to Barbie's introduction and her unreasonable dimensions, and overt whiteness for the first several years she was available. But it is hard to argue with the overall evolution of the brand to include diverse bodies and races, as well as abilities and occupations.

The Barbie Inspirational Women's Series and their Dream Gap Project are the natural progression for a company that began as a way to feature women who knew their value. Creator of Barbie, Ruth Handler, is quoted as saying, “Barbie has always represented that a woman has choices. Even in her early years, Barbie did not have to settle for only being Ken’s girlfriend or an inveterate shopper. She had the clothes, for example, to launch a career as a nurse, a stewardess, a nightclub singer. I believe the choices Barbie represents helped the doll catch on initially, not just with daughters — who would one day make up the first major wave of women in management and professionals — but also with mothers.”

While Ruth might not have dreamed of a world with a real life astronaut or social justice hero as a Barbie, it's fair to say that she would have been over the moon at the idea.