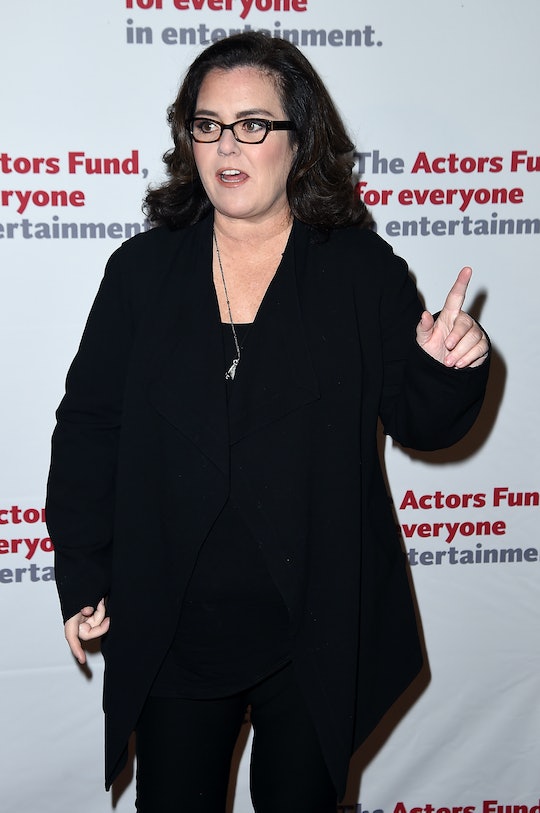 Rosie O'Donnell called it 10 years ago. It was Rosie's Miss USA rant from The View that started the epic feud between O'Donnell and Donald Trump in 2006, and Monday's debate proved Trump is still ruffled. Trump couldn't resist taking another swipe at the comedian during the debate and she fired back — hard. Rosie O'Donnell's tweets during the debate prove she was calling Trump a "snake oil salesman" way before it was fashionable.

At the end of the debate, former Secretary of State Hillary Clinton took an opportunity to point out some of the really unseemly names he's called women in the past. It didn't matter than Clinton wasn't referring to what Trump has said about O'Donnell — he couldn't resist the opportunity to slam her once again.

“Rosie O’Donnell, I said very tough things to her, and I think everybody would agree that she deserves it and nobody feels sorry for her,” Trump responded, according to the Washington Post.

O'Donnell had made it clear earlier Monday evening that she would not be watching the debate. Who could blame her? But once she got word Trump was once again using the presidential debate stage to settle the score with her, O'Donnell came back swinging.

She started out the evening by posting this sweet bedtime video she captioned, "While not watching. The are of the deal dakota style."

After that though, things started heating up on O'Donnell's Twitter feed. After Trump mentioned her during the debate, there was this simple reply from Rosie:

Then she really got going. First she posted the video that launched the whole feud. Take a few minutes to watch. It's incredible how timely O'Donnell's 2006 attacks against Trump are in light of his run for president. She calls him a "snake oil salesman" and pushes back against the notion that he's a self made business man. The high point is O'Donnell's impression of Trump, complete with her hair flipped over to mimic his famous comb over.

Rosie was calling out Trump's hypocrisy long before it was the cool thing to do.

Then O'Donnell shared this article about Trump's debate comments.

She also wanted to fire one more shot at Trump over his support of the Iraq war:

There should be no doubt to anyone watching that Trump is so petty that he would use his moment in front of the world to re-hash a 10-year-old reality show feud with O'Donnell. Over the years Trump has hurled some decidedly un-presidential insults her way including, "Obnoxious, dumb, loser, disgusting, slob, weak, fat, ugly face, and unattractive," according to The Advocate.

Not a good look for a man who wants to be the leader of the free world with access to the nuclear codes.