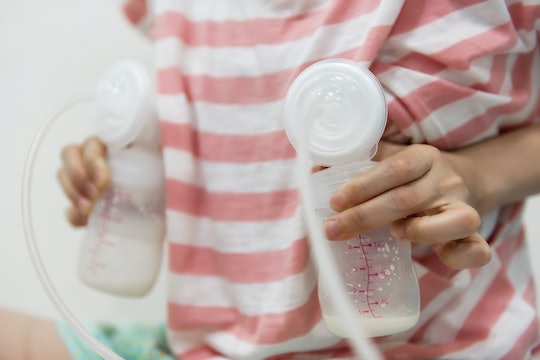 Like most first-time soon-to-be-parents, fashion writer and mental health ambassador Roxie Nafousi had a picture-perfect vision of new motherhood. The serene moment your baby is laid on your chest. The quiet, bonding moments that accompany breastfeeding. The peace a new mom feels, having met the person she grew for the first time.

And, like most parents, Nafousi realized parenthood rarely, if ever, looks the way our child-free selves thought it would.

The sudden, arguably unkind shift in reality that a new baby brings wasn't a foreign concept to Nafousi, who had experienced prenatal depression throughout her pregnancy ("That's how I found out I was pregnant," she told me) and who has made the choice to be open about her mental health issues in the past. She knew, early on, that what most perceive pregnancy and parenthood to be like is far from the reality for many.

"I was really conscious of postnatal depression, and I wanted to make sure that I was in a really strong place before the baby came," she says. "I put in all the sort of preventative measures, and it got me thinking a lot about feeding."

After hearing so many other new moms talk about their difficulties breastfeeding ("It was going to be six weeks of hell, basically") Nafousi made the shame-free decision to exclusively bottle-feed.

"I thought, OK, well maybe if I don’t breastfeed, that’s one thing that I can do to prevent me from getting postnatal depression, because I’m going to be able to have a way to feed the baby in the night, for example, so I can get rest," she says. "I knew I wasn't going to be attached to the baby all the time."

Up to one in seven women will experience postpartum depression, according to the American Psychological Association. Inadequate sleep, physical and mental exhaustion, and the inability to fully recover from labor and delivery are among the contributing factors, according to the National Institute of Mental Health, so Nafousi was onto something when she prioritized her ability to get some sleep.

"The happiness of the mother, I think, is so much more important for the baby’s wellbeing than anything else," she says.

It was a really good feeling to be able to give him something that my body was obviously wanting to do.

The decision to forego breastfeeding ushered in a new picture of motherhood for Nafousi; a picture that, she assumed, would inevitably include some outside judgment. "I was a bit worried of being sort of mom-shamed over it, but I did lots of research and I figured that actually, rather than saying that ‘breast is best,’ actually just fed is best."

After a 36-hour labor that left Nafousi "shattered," the midwife put her son on her breast for two minutes. "I started shaking, I felt sick, it was just not that sort of picturesque, movie moment," she says. Exhausted from labor, Nefousi wasn't ready for her son to be on her breast, she tells me. "I didn't really hold him for that first day because I felt so unwell."

While women often aren't able to understand what they were going through in the newborn period until years later, it’s uniquely valuable to hear Nafousi speak so plainly on her experience, talking from that very, often blurry, sleep-deprived place.

What Nafousi couldn't have anticipated, however, is that a few days later her new plan would change. Again.

"When we got him home the next day I could feel my boobs feeling quite full, and I thought, ‘We’re just going to try again. You know what, I’ll just try it, why not?’ And I put him on the boob and I did like one or two feeds, and I thought, ‘Ah, there is something quite nice about feeding my child. I do feel quite good about this, and my milk is coming in and I feel really lucky about that, because I know that that’s not always the case,'" she tells me.

Her plans were changing, and she could feel it. She still didn't want to breastfeed though. Which is when an alternative presented itself; an Option C she didn't consider until that very moment.

I don’t think I’ve ever used my instincts or gut feeling more than I have over the last three weeks.

"By day three, my milk really came in and my boobs were so engorged I couldn’t walk, I couldn’t laugh, it was uncomfortable, and I was getting frustrated," she says. "I had gone, by this point, from a B-cup size to a double-G." Nafousi says she still couldn't enjoy the breastfeeding experience, so she took out her pump to relieve her breasts. A choice that ushered in one of those "aha!" moments that make motherhood just a little bit easier.

"The draining of the milk was so easy," she tells me, "and I thought, ‘Oh my God, why don’t I just pump?’ And then I get all the benefits that I see of bottle-feeding — which is the freedom and knowing how much you’re taking, and being able to get kind of routine, someone else being able to feed Wolfe as well as myself — and I also get the benefit of using the milk that my body has produced, which I didn’t realize would feel so good."

"It was a really good feeling to be able to give him something that my body was obviously wanting to do," she continues.

Nafousi plans on exclusively breast pumping for at least six weeks, then leaving it behind when she returns to work. But the rollercoaster she has been riding since her son, Wolfe, was born less than four weeks ago — and throughout her pregnancy — reminds her of one inalienable truth of parenthood: things change. So she's hesitant to say she knows what will happen. "At the very beginning of motherhood I learned that you can never make a plan that you stick to," she says, laughing.

So it's very possible that her plans will change again, and she's OK with it. In fact, she looks forward to the unforeseen changes parenthood is sure to bring.

What makes you happy. Is it a decision for you or is it for someone else?

"I don’t think I’ve ever used my instincts or gut feeling more than I have over the last three weeks," she says. "That is my go-to place for any answer."

She no longer worries about how other people are going to feel about her parenting decisions ("Is my husband going to support this? Are my parents going to think it’s a good idea? What are my friends doing?’ As soon as you’re answering those questions, you’re going off. That’s not following your instincts, that’s really worrying about the pressure of others.") and she no longer clings to her pre-made plans with an unshakeable sense of certainty.

Instead, Nafousi says going to continue to focus on herself, her body, and whatever her gut tells her.

"Every mom is going to have a different kind of response to you when you ask for advice, so you’re going to be constantly bombarded with conflicting information," she says. 'So getting to know what makes you happy and feels good for you is really key. And sometimes we have to learn what our instinct is because we don’t know where it is because we’re so used to going off everybody else’s opinion or going off someone else's decision for us."

Nafousi says it takes practice to learn how to check in with yourself and your own needs, but the more you practice it the more quickly the answer will come to you when you need it most.

"You’ll be able to kind of like call it to you, sort of straightaway, if you practice it," she says. "And that is just one of those things your baby needs: What makes you happy. Is it a decision for you or is it for someone else?

More Like This
These 4 Sleeping Positions Will Keep You Comfortable After A C-Section
Everything You Need To Know About Postpartum Blood Clots
Breaking Down The Different Types Of Postpartum Infections
Ashley Graham On The “Fun, Organized Chaos” Of Raising Twins