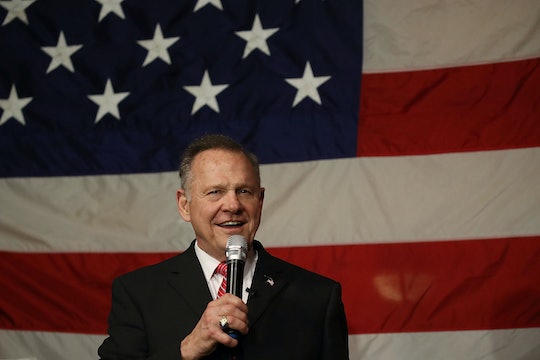 Roy Moore Said The Last Time The U.S. Was Great Was During Slavery, & People Are Furious

With the near-constant flow of allegations of sexual misconduct dominating the headlines, it's a challenge to keep up with the other questionable and controversial behavior of Alabama's Republican Senate hopeful, but this one's pretty hard to miss: when asked at a campaign event to name the last time America was "great," Roy Moore invoked slavery, which most people agree was the darkest point in U.S. history. The remark was actually made in September, and quietly reported by the Los Angeles Times, but on Thursday, former Obama administration official Eric Columbus amplified the article with a viral tweet, and the comment is finally getting all the attention it deserves.

Responding to a question from an audience member in Florence, Alabama, on Sept. 17, Moore said America "was great at the time when families were united — even though we had slavery. They cared for one another. Our families were strong, our country had a direction." The Times has since published an audio recording of the exchange. Trump critics have long speculated about the true meaning behind the slogan "Make America Great Again," questioning exactly when the country was considered "great," and why. Though Moore's not an official Trump spokesman, his personal interpretation is exactly what many suspected. People are pissed, but not all that surprised. A spokesperson for Moore provided the following statement to Romper: "Judge Moore clearly made his point, which is that America is great when our families and our faith are strong. Judge Moore has never condoned slavery and to suggest such is recklessly malicious."

And just in case Native Americans and Asian Americans are feeling left out, don't worry; at that same event, the Times reported, he also referred to them as "reds and yellows" — terms so blatantly backwards and offensive, most people haven't probably heard them uttered outside of a 1930s cartoon.

Question: is it still a dog whistle if we can all hear it?

He's also, on multiple occasions, insinuated that the Sept. 11, 2001 attacks were God's punishment for abortion and same-sex marriage, according to CNN.

Moore once wrote an op-ed arguing that Minnesota Rep. Keith Ellison was unfit for Congress because he's Muslim, a position so outrageous, Snopes had to verify it. "In 1943, we would never have allowed a member of Congress to take their oath on Mein Kampf," he wrote, "or someone in the 1950s to swear allegiance to the Communist Manifesto. Congress has the authority and should act to prohibit Ellison from taking the congressional oath today!"

"Moore tends to prefer his interpretation of Christian Scripture to laws and court orders," the Times reported, which got him kicked off of the bench twice for defying a federal order to remove a Ten Commandments monument from a courthouse, and refusing to abide by the Supreme Court's ruling on marriage equality. Applying religious law over the law of the land? Didn't someone warn us about that?

It's confusing that Moore expressed concern for family unity, considering the fact that as a circuit judge in the 1990s, he took a woman's children from her custody and wouldn't allow her to visit them without supervision because she was gay, according to CNN. "The court strongly feels that the minor children will be detrimentally affected by the present lifestyle" of the mother, Moore's ruling stated, which is "forbidden both by the laws of the State of Alabama and the Laws of Nature."

Moore's thoughts on transgender Americans probably won't shock you if you've read this far. The Montgomery Advertiser reported on this gem from a November press conference: "The transgenders don’t have rights. They’ve never been denominated as having rights by the US Supreme Court. [Opponent Doug Jones] believes in transgender bathrooms and transgenders in the military. I disagree with him 100 percent."

And ladies! Don't think I forgot about you! While Moore has waffled on whether it's appropriate for grown men to date teenagers, he's made it clear that he believes there's at least one area when children and adult women are equal: neither has any place in politics. In 2011, he co-authored a "study course" that says women shouldn't be allowed to run for office, according to ThinkProgress.