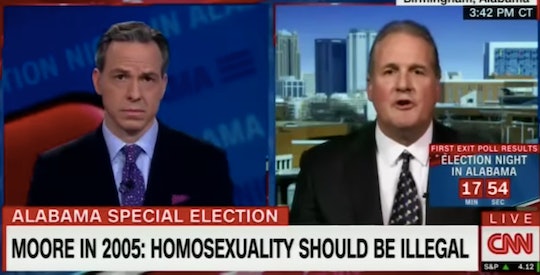 On Tuesday, Alabama voters headed to the polls for a special election to fill one vacant Senate seat. The election, though, has garnered national attention after the Republican candidate, Roy Moore, fervently denied several women's accusations that he pursued sexual relationships with him when they were teenagers and he was in his 30s. But Moore critics contend that his ultraconservative views made him an inappropriate choice for the position regardless of the reports of sexual misconduct. Among those views is Moore's unabashed, long-held belief that Muslims should not hold elected office, an issue that CNN's Jake Tapper raised with a Moore surrogate on Election Day. And in the now-viral interview, Roy Moore's spokesperson was stunned to silence when Tapper busted his flimsy argument wide open.

The segment started out, disturbingly enough, with a back-and-forth in which the spokesperson, Ted Crockett, conceded that Moore "probably" believes that homosexual conduct should be illegal — and it just went south from there. Specifically, Tapper brought up the fact that, back in 2006, Moore had argued that the country's first Muslim congressman, Keith Ellison, should not be permitted to serve because of his faith — a position he's defended since launching his current Senate campaign.

And, oh boy, were audience members in for an unexpected (and hilarious, considering the circumstances) treat.

As of Tuesday night, the polls in Alabama have closed and the entire county is watching (or so it seems) as the votes are tallied. If Moore — who was ousted from the state's Supreme Court twice for his lack of integrity and impartiality and recently suggested that this country was a better place when slavery was legal, according to TIME — manages to best Democratic opponent Doug Jones, this interview with his spokesperson will prove even more objectively awful. That is, from the standpoint of the views Crockett expressed in it. The part where he gets owned will never stop being funny.

Toward the end of the interview, Tapper dives right into it, asking Crockett why Moore doesn't believe that Muslims should be allowed to serve in Congress. At first, the former Commissioner of Alabama's Shelby County is confident, telling Tapper that "you have to swear on a Bible to be an elected official in the United States of America" and that "a Muslim cannot do that ethically." And Tapper's just as quickly tells him that's not true.

"Oh, no. I swore on the Bible," Crockett responds after Tapper lets him know that elected officials can be sworn in on a Jewish bible or really anything at all. "I’ve done it three times, Jake."

Then, Tapper responds with this gem:

I'm sure you have. I'm sure you picked a Bible. But the law is not that you have to swear on a Christian Bible. That is not the law.

Surely a man who's gone all-in for such a brash candidate as Moore has a quick comeback when confronted with this truth, right? Actually, no. Upon learning this information, apparently for the very first time, Crockett simply sits there, open-mouthed, blinking, and silent. He's at such a loss for words, in fact, that Tapper starts wrapping up the interview before he speaks again. "I know that Donald Trump did it when we made him president," he finally responds. Which is when Tapper comes in with the final blow:

Because he’s Christian and he picked it. That's what he wanted to swear in on. Ted Crockett with the Moore campaign. Good luck tonight. Thank you so much for being here.

And then it's over. At least Crockett got to learn something new. For much of the rest of the country, though, this interaction was just further proof that Moore does not belong anywhere near the Senate.