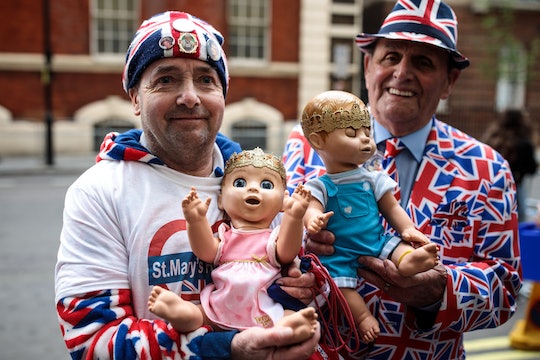 The newest member of the British royal family has officially arrived — and it's a boy! Kensington Palace confirmed Monday that the Duchess of Cambridge, Kate Middleton, delivered her third child, a baby boy, at the Lindo Wing of St. Mary's Hospital in London, according to CNN, and now, the wait is on to see the royal couple pose with their son on the hospital steps for the very first time. Unsurprisingly, the birth has been big news on social media, and royal baby memes and tweets show that people are totally ready to celebrate the birth of the new prince.

As with her deliveries with Prince George and Princess Charlotte, the duchess seems to have had a pretty quick labor with her third child: she arrived at the hospital in the early stages of labor at around 6 a.m. local time, and the newborn prince was born at 11:01 a.m., according to The Sun. And from the sounds of it, the world may not actually have to wait much longer to get its first glimpse of the newest royal — Middleton's stylist has reportedly already left the hospital, suggesting that the duchess may soon be ready to make her first post-birth appearance.

In the meantime though, Twitter has plenty to say about the royal baby's arrival.

The announcement of the baby boy's arrival brought on the usual pomp and circumstance outside the hospital, as royal watchers promptly celebrated the latest news:

And confirmation that the baby was indeed a boy gave some instant bragging rights:

While, for others, uh, maybe not so much:

The focus naturally turned to speculation over the baby's name:

And some couldn't help but think that it was particularly unfortunate that the infant couldn't be named George, given that he'd actually been born on St. George's Day:

Speaking of George, some thought that perhaps the duke and duchess' firstborn might not feel particularly pleased that his brother might be stealing his thunder:

And others felt it appropriate to welcome Princess Charlotte to her new position in the middle of the sibling pack:

But as the youngest, some also thought that the newborn prince might want to brace himself:

And then, of course, there were those who couldn't help but feel a bit sorry for Prince Harry, who ends up further and further from the British throne with each child his brother brings into the world:

Some users took the opportunity to keep all the excitement in perspective:

While many others were just totally here for the news:

But jokes aside, there was also one other pretty cool reason to celebrate. In 2013, the law overseeing royal succession changed to ensure that princes would no longer take precedence over their sisters, according to The Telegraph — meaning that Princess Charlotte gets to keep her place as fourth in line for the British throne, even though she now has a younger brother (as she should!)

Let's be honest, give that many of us have waited months for this very day, the royal baby's arrival does feel like a huge cause for celebration, even if it probably shouldn't really be that big of a deal in the grand scheme of things. But hey, it's a Monday, and we could all probably use a little bit of good news these days in general, and what purer reason could there be to be happy than over the birth of a new tiny human?

But even if you aren't exactly on board with all the excitement over the royals, the upside over the royal birth, at the very least, is that social media is totally bringing its A-game. And, well, that's always something to look forward to, regardless of your views on the British monarchy.