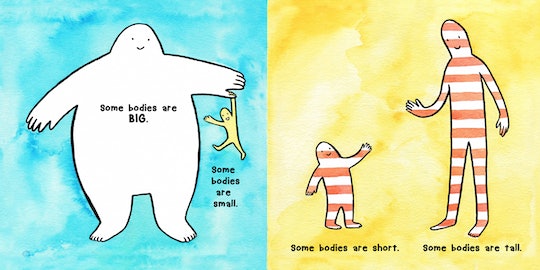 Roz MacLean is an artist, illustrator, special education assistant, and author from Vancouver, Canada. In 2014, MacLean published her first children’s book, Violet’s Cloudy Day, to help kids struggling with anxiety overcome their fears and become empowered thinkers. Later this month, MacLean will be publishing her second book, The Body Book, through Promontory Press. And while The Body Book differs quite a bit from Violet’s Cloudy Day, both in its design and message, MacLean approached The Body Book as she approaches all of her art: with intention and purpose and the hope that her art and her words will inspire others.

But what is The Body Book all about?

Well, MacLean's latest children's book, slated to be released on August 31, aims to celebrate every kind of body, regardless of that body’s shape, size, or level of ability. MacLean hopes The Body Book will instill love and acceptance in children at a very young age, and with rhyming text and bright, simple illustrations, The Body Book is perfect for even the youngest of audiences — though children from pre-K to first grade will probably get the most out of it and its message.

When I asked MacLean why she chose to write about body positivity — and to such a young audience — MacLean explained that not only was she hoping that the book would spark a dialogue about body image between children and their parents, MacLean wanted to help give children a "shield" and "armor":

I think the earlier you can speak [to a child] about a topic, the earlier you set a tone of what is true and untrue. That 'truth' will be questioned later in life when they encounter criticism, but...I like to think of early age body positivity as an armor. I hope the negative messages will bounce off. It’s also good to address the subject directly, as it gives kids a script and strong connection between their bodies and the different ways they can think about them.

In fact, MacLean drew her inspiration for The Body Book from her own childhood and her later struggles with an eating disorder:

Part of my recovery has been to honor the child within who needed something different ... and the books that I write are the books that I wish I had as a child. I wish I had these ideals instilled in me early on so all of the other ideas just seemed like nonsense, and I don’t want girls today to have to unlearn everything.

MacLean has spent much of her adult life not only honoring her younger self and inner child but honoring all children who need "something different." And that work is evident not only in MacLean's writing and art, but in her day-to-day life, as MacLean has has spent the last seven years teaching differently-abled children:

I work with kids with disabilities. With very visible disabilities...the parents [of my students] really worry about their children. They are afraid their kids will be mocked or bullied. But what I’ve learned is that kids really have kind and inclusive hearts...they don’t see the differences we see, and that’s been a big motivator for me. That is why [I feel so strongly about speaking out] and normalizing all bodies.

Because regardless of our age, our shape, our size, or abilities, we are only as strong as we are empowered: "We need to love and accept ourselves. Every person and every body should be treated with respect... that’s what The Body Book is about. It is about promoting that self-esteem and self worth...and everybody is OK. The Body Book is speaking to my younger self saying “believe in this. Believe in this instead.”