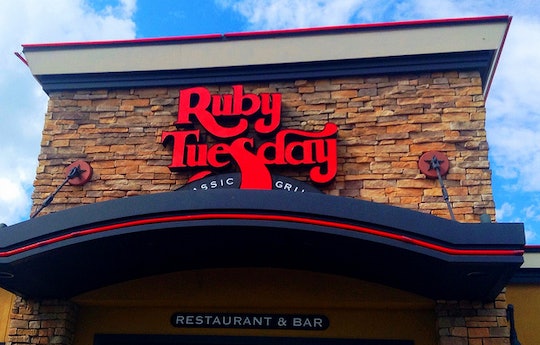 Ruby Tuesday Isn't Closing Forever, Which Is Good Because We Can't Live Without These 5 Things

As someone who relies fairly heavily on my Facebook sidebar to keep me up-to-date on what’s happening in the news (I know, I know), I was totally shocked and horrified when news that Ruby Tuesday was closing started trending on my feed. Oh, Ruby Tuesday. Home of the under-$10 garden bar lunch combo. The place where kids eat free on Tuesdays, which totally matters when you’re a mom of twins who’s usually too tired to cook dinner at the end of the day. What would I do without it? But just as I was mourning the soon-to-be Ruby Tuesday-shaped hole in my heart, news came to light that only some locations were closing. And, in fact, they wouldn’t really be Ruby Tuesday at all, they would be Lime Fresh Mexican Grills. Phew. That was a close one.

But even though Ruby Tuesday isn’t going anywhere, this horrifying close call made me think about all of the things the world would be missing if one day the restaurant ceased to exist. And after some very important deliberation with other fans of the casual chain restaurant, we realized together that life just wouldn’t be the same without these five Ruby Tuesday offerings: