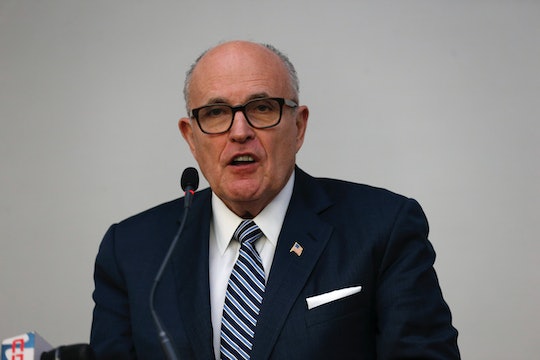 With all of the recent tragedies across the nation, alongside the peaceful-turned-controversial protests everyone seems to have an opinion on what is going on. And when I say "everyone," I mean everyone — from celebrities to politicians to your former 7th grade crush, each person seems to think they're experts on race, police brutality (or the "lack" thereof), and the media. Former New York Mayor Rudy Giuliani is now among this group of people to voice his opinion. And unfortunately, Giuliani's Black Lives Matter comments are a liiiiiiiiittle tone deaf, to say the least.

Giuliani took to CBS News' Face The Nation on Sunday to voice his opinions on the Black Lives Matter movement — because someone asked him to. What the rest of the nation did not ask for was his particularly biting commentary about the movement and how using the phrase "black lives matter" was "inherently racist." Giuliani also provided some very... colorful commentary on how to prevent the killings of innocent black men from police officers:

If you want to deal with this on the black side you've got to teach your children to be respectful to the police. And you've got to teach your children that the real danger to them is not the police, the real danger to them, 99 out of 100 times...are other black kids who are going to kill them, that's the way they're going to die.

Where does Giuliani get his information? Where are the statistics? And why does he miss the point altogether? The problem isn't protecting our children from harm or teaching them to be respectful — the point is that innocent lives are being taken by police with race at the core of these issues.

But the Black Lives Matter movement isn't racist or anti-American. The movement simply calls attention to the lives being "targeted for demise." No where in the phrase black lives matter does the word "only" appear in front of it. Yes, it is very well known that everyone's life matters. But in a society where black lives can oftentimes be treated or seen as less valuable, it is important to reiterate that black lives do matter.

Rudy Giuliani is a known conservative politician who was the Mayor of New York City from 1994 to 2001. During his time as the Mayor, Giuliani was able to reduce the crime rate by 56 percent. Therefore, it is understandable for him to be speaking about crime on television. However, Giuliani might have to reconsider how he sees the black lives matter movement.