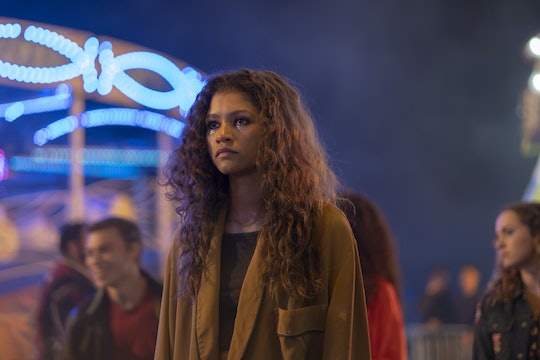 As a person with a long history of battling mental illness, who struggled as a queer, Black teen without family support in a community impacted by mental health stigmas, it makes me nervous to think about the harmful things that kids, including my own, will have to face years from now. Shows like HBO’s Euphoria make me nervous about the future, too, especially when in regards to continued access to mental health services. But it also fills me with a painful sense of nostalgia. Because while the characters in Euphoria, especially Rue, struggle, I find myself longing for what could've been if only I had access to the type of support they’re offered.

As a Black, queer person who suffers from chronic pain I often find myself checking my own privileges. I may not be wealthy, I may not have access to certain resources that I know would make my life, and the life of my family, immeasurably less difficult, but I do have a job, a roof over my head, a supportive family, and access to stable internet I can take advantage of from a laptop. Those privileges have made my experiences navigating mental and chronic illness much less traumatic and difficult.

But back when I was a suicidal Black girl with an eating disorder — who coped with abuse by self-harming — I didn't feel privileged. The few times I turned to family for support, I was told to either pray away my pain or get over my “white girl” issues. That’s what I was dealing with, I was told. White Girl Issues.

In Euphoria, Rue (played by Zendaya) is a high schooler struggling with addiction who is recovering after an overdose and a summer of rehabilitation. She consistently misleads her family in regards to her health, her recovery, and the difficulties faced when trying to stay sober. Even though she attends Narcotic Anonymous, she finds ways to lie her way out of actually attending multiple, much-needed sessions.

It’s clear that Rue’s anxiety and depression impact how she is around friends, around her family, and around Jules (played by Hunter Schafer). I see so much of my younger self in her character. The moments when she struggles to advocate for herself; the moments when she feels abandoned and alienated and turns to substances to numb the pain; I have lived those moments.

But I also envy Rue. If I had access to the privileges afforded to her, I have no doubt that my life as a young teen would’ve been different. When I think about the multiple times growing up when I would ask a family member if I could start treatment for an eating disorder, and receive help for suicidal ideation, and I was told that I could go if I actually had a problem, I can’t help but wish my parents were as supportive as Rue’s. Because unlike Rue, instead of being encouraged to seek treatment, I was told that church would be the best remedy.

I want to help my child know euphoria, without having to suffer or self-harm in order to experience it.

Conversations about mental health in the Black community are finally starting to change. This February, actress and mental health advocate Taraji P. Henson told NBC that “people in the African-American community have long been afraid to talk about our mental health; we just don't do it. We're told to pray it away, we're told to be strong, we're told it's a sign of weakness or, a lot of times, mental health issues comes off as ‘rage’ and is dismissed or ignored.” In an effort to help change the conversation and break the stigmas, Henson founded the Boris Lawrence Henson Foundation, noting that while “one in five Americans have a mental illness, African-Americans are the least likely to seek treatment, and have a long history of being misdiagnosed.”

But change is slow, and when I consider the years I spent lost and hurting myself, it’s difficult not to grow angry by just how slow it truly is. If I had access to people or resources who understood the seriousness of my failing mental health, and the physical effects that bulimia had on my mind and body, things would’ve been different. I wouldn’t have to imagine what life would’ve been like if they had simply offered their support. If I wasn’t constantly forced to internalize my pain as something normal; something to live with; something I was supposed to be strong enough to deal with on my own. I would simply be living it.

According to the National Alliance on Mental Illness, there are multiple factors that prevent Black people from seeking treatment and receiving quality care including, but not limited to, lack of information and understanding about mental health, spiritual and faith-based beliefs, reluctance and inability to access mental health services, and provider bias.

As a kid, if I had a dollar for the amount of times I was told that all I needed to do was "pray away" my problems — like my eating disorder, depression, and post-traumatic stress disorder (PTSD) that developed as a result of child abuse — I would have been able to afford the best therapist in New York City. But no one was paying me to endure a never-ending onslaught of outdated and problematic thinking, so I didn't have access to the type of therapy that would have helped me.

Euphoria is a reminder of what I could have had, what I should have had, and how a wide range of support would have changed my life for the better.

Rue, and her peers, might not attend an elite school like teens on shows like Gossip Girl, but the majority do live in families with enough income to afford life in the suburbs that, for Rue, includes rehab and a nice home. Most importantly, and often taken for granted by some teens, is Rue's supportive and loving family who recognize her need for help and strive to support her in her recovery. Sometimes, that level of familial support can make all the difference.

So even though Rue does have access to things like Narcotics Anonymous, rehab, and treatment (each of which her family encourages her to take advantage), her journey towards recovery is complicated and difficult. Her peers, as well. It goes to show that class privilege and access to resources do not necessarily lead to wellbeing and healing. But it is an undeniable truth that a lack of access to helpful resources can make an impact on the lives of teens struggling with mental health issues. Especially when they turn to things like drugs to attempt to cope with their pain.

I know the privileges afforded to Rue would have changed my life. If I had the support of my family, and a parent with the financial means to send me to rehab and understood how necessary it would have been for my healing, my life would have been different. And while it might be easy to blame my family, the real culprit is the interlocking systems of oppression that make it difficult for everyone to achieve wellbeing; systems that Euphoria has yet to uncover.

Euphoria is a reminder of what I could have had, what I should have had, and how a wide range of support would have changed my life for the better. But it's also a reminder of everything I want to do for and give to my child. It's a reminder of the work that needs to be done, and the lessons that my child will unfortunately have to learn, in a world that doesn't seem willing or ready to address and correct systemic issues that result in lack of access to mental health services and quality, culturally competent medical care.

The internet and ever-increasing global connectivity have caused me to fear some things. It’s also, though, given me access to information and resources I didn’t have growing up. Instead of channeling my worries and fears brought on by the world, and things I see in shows like Euphoria, into becoming an overprotective parent, I can channel it into making sure my children have the skills and tools needed to take on the world in their own way.

My child will have to be their own advocate and think critically, and I will have to make sure they always feel comfortable coming to me with their worries, fears, and questions. I will have to do the work necessary to ensure they won't hesitate talking to me about sex, drugs, and mental health issues.

I want to help my child know euphoria, without having to suffer or self-harm in order to experience it.