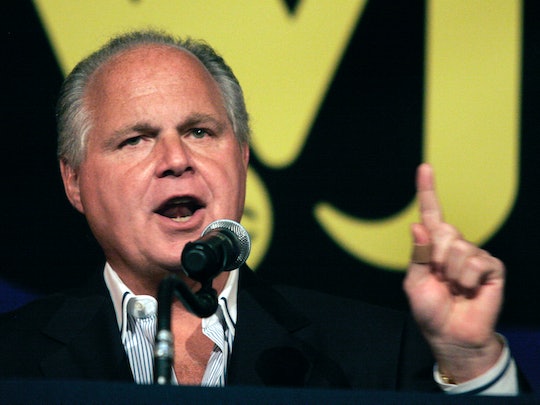 Rush Limbaugh's Thoughts On Harambe The Gorilla Are Truly Baffling

Bill Nye the Science Guy, he is not. Perhaps Rush Limbaugh needs to high school biology refresher, because he seems a bit confused about the whole evolution thing. The conservative talk radio show host had a unique take on the death of Harambe the gorilla, a 17-year-old western lowland gorilla that was shot and killed by zookeepers on Saturday after a 4-year-old boy managed to get into the animal’s enclosure at the Cincinnati Zoo. To be sure, Limbaugh has said a lot of interesting (read: horrible) things over the years, so we shouldn’t be shocked by anything he says now. Still Rush Limbaugh’s thoughts on Harambe the gorilla this week were truly baffling.

More Like This
Every Adorable Photo Of Prince Louis
Josh Duggar's Family Has Spoken Out As He Faces Child Pornography Charges
Vaccinated People Can Ditch Masks. Where Does That Leave Kids?
11 Candid Moments From Prince Harry’s Interview On Dax Shepard’s Armchair Expert

The public outcry at the controversy surrounding the endangered species’s death has been raging online and in the media for the past week, so Limbaugh decided to address the incident during his radio talk show on Tuesday.

He went on to explain to his audience that “the evolution crowd” (we prefer "evolution posse"), are busy searching for missing link because “they think we were originally apes.”

“If we were the original apes, then how come Harambe is still an ape?” Limbaugh posited. “And how come he didn’t become one of us?” In other words, if humans used to be apes, how come there are still apes around? Why didn’t they evolve too? It’s a kind of logic akin to the “if global warming exists, why is it snowing outside” argument.

It's also the kind of logic and brutish sentiment that shouldn't exactly shock us by now. I don’t have all day, but to name a few past instances: He's previously called a young college student a “slut” for wanting birth control; suggested feminism “was established to allow unattractive women easier access to the mainstream;” and once complained that watching the NFL is like watching “a game between the Bloods and the Crips without any weapons.” This latest backward tirade is just another drop in a very large bucket.

This isn’t the first time Limbaugh has expressed these strange views on evolution either. “All I know is I’ve never been a chimpanzee; I don’t believe in this garbage I ever was. Because [if] we were chimpanzee, why are the chimpanzees still here?” he asked on a 2004 episode of his talk show. “If we were baboons, you know, if we evolved from that, what happened to them? Why didn’t they evolve? How come they got stuck still being idiot gorillas and stuff and we got to be humans?”

Granted it is funny to imagine that there were some apes, like Harambe, that saw humans evolving, thought “Nope, not for me,” and simply remained their furry selves. But, unfortunately for Limbaugh, apes did not “become” human, humans and apes developed alongside one another. Just as Limbaugh, himself, notes, evolutionists are searching for a missing link, a common ancestor between the two species with a combination of both primate- and human-like traits. Think of it like a tree: the missing link is the base, humans and apes are separate branches that grew out of that base before splitting millions of years ago. (I realize this is an incredibly simplistic, elementary school view of evolution, so no letters from angry scientists out there, please.)

The idea of finding a single missing link has actually fallen out of vogue in scientific circles in the past few decades. According to Steven Churchill, a human paleontologist at Duke University, because of humankind’s complicated evolution, it is unlikely that we will find any fossils directly linking modern Homo Sapiens to our ape cousins. “The idea of a ‘missing link’ between humans and apes is kind of a Victorian-era idea, and we like to shy away from that,” Churchill told NBC News last year.

Even so, Limbaugh’s view of evolution is still ridiculous. While the 65-year-old has never declared himself to be a creationist—believing the universe and all living things were formed through the actions of a divine creator—his conservative Christian values align with such beliefs. In 2010, he addressed Darwinism and evolution on his talk show, saying,

I don’t think evolution can explain creation. And something had to evolve from something. Where does something come from? It didn’t evolve from nothing. Something had to put it there. It had to be created. Darwin tries to argue against creation, and it gives the anti-creationists ammo, Darwin does.

To be fair, later in this discussion, Limbaugh did claim, “I have never said I don’t believe in evolution; clearly things evolve.” He was simply standing up to what he saw as Darwinist’s argument “against the whole concept of creationism,” which he considered “intellectually vapid.”

However, the host has pretty much consistently disregarded fossils that support the theory of evolution, claiming that both creationism and evolution are based on faith and not hard evidence. Limbaugh has manipulated the semantics of “the theory of evolution,” to portray it as a hypothesis and not scientific fact. In reality, a scientific theory is well-substantiated based on a large grouping of facts that have been repeatedly confirmed through observation and experiment, for example: we know gravity exists yet it is still called the theory of gravitation.

Not only did Limbaugh mock Darwin and evolution on his Tuesday show, he also harangued animal rights activists like PETA for opposing the capture and containment of animals like Harambe the gorilla, saying they had “obviously not read Genesis.” He is presumably referring to Genesis 1:26, which according to the New International Version quotes God as wanting mankind to “rule over the fish of the sea and over the birds of the sky and over the livestock and all the wild animals, and over all the creatures that move along the ground.”

“There’s no way human beings are going to not be interested in animals,” Limbaugh continued. “Gawking at them. Out of safari, hunting them.”

It’s totally surreal that Limbaugh seized on the death of an endangered animal to not only promote human dominance over animals but to also claim that evolution is a hoax.

While no one would ever look for sympathy from Rush Limbaugh on the death of Harambe the gorilla, his comments on the incident were truly something else. To say the least.