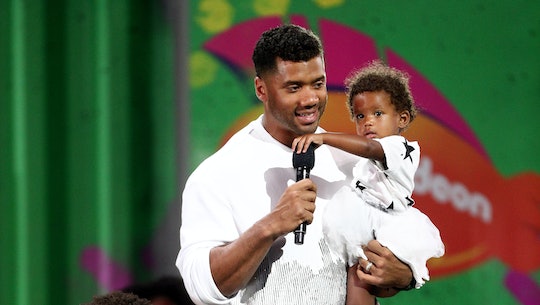 Russell Wilson Doing Ballet With His & Ciara's Daughter Is Too Precious

I knew that Russell Wilson, the Seattle Seahawks quarterback, had a reputation for being an all-around awesome guy, and it had registered somewhere that he's Ciara's other half, and the crazy-gorgeous couple had an equally adorable family. But until today, I did not know that Russell Wilson did ballet with his 2-year-old daughter, and the video has therefore been life-changing.

As Popsugar reported, Wilson posted a jaw-droppingly cute video on his social media, in which Wilson — who recently made news with his renegotiated $140 million contract, making him the NFL's highest-paid player, the Guardian reported — takes his 2-year-old daughter with Ciara, Sienna Princess, to ballet for a daddy-daughter dance class.

The two stretch out (I note that NFL players have previously turned to ballet classes to improve their game), tippy-toe over stars on the floor of the dance studio, practice their leaps together, and finally, take a rest break with a nap on the floor to music.

"Special Bond. Mornin’ Ballet with my baby girl. ❤️ #ShesGotTheMovesLikeCiara #SorryJagger @Ciara 😍💃🏽🕺🏾," Wilson wrote on his Instagram about the experience, to which fans went a teeny bit crazy.

"Sienna is just gorgeous! 😍 Such a beautiful daddy and daughter moment," wrote one commenter, while another simply noted, "Goals."

Sienna's mom liked the moment too, putting it on her own Instagram with the caption, "My heart can’t take it. ❤️ These 2 back at it again. @DangeRussWilson. #Ballet #DaddyDuty."

Ciara has been open about the heartbreak she endured prior to meeting Wilson due to her breakup with music star Future, the father of her older child, son Future Zahir, as Fox News reported.

Meeting Wilson, though, something just clicked, the "Love, Sex Magic" singer said, per Fox: ""I had never had that feeling in my life...The way that he looked at life was different. Also, the energy with my son, it just felt right. And of course, the consistency. He's consistent... It's a different level of love."

The pair, who were married in 2016, welcomed Sienna in April, 2017, as Popsugar confirmed, although by all accounts Wilson is extremely involved as well with raising stepson Future, whom he featured on his Instagram when Future turned 5 last month.

Ciara previously told Jada Pinkett Smith on the star's Red Table Talk podcast that Wilson's level of involvement in family life is "one of the sexiest things about him," with the ball player having jumped in to help after meeting little Future at just 10 months old, changing diapers and everything.

"He was so proud of, like, Future’s first steps," Ciara told Pinkett Smith. "When I go to teacher-parent conferences, he’s at every one of them with me, and I make sure I schedule it so he can be there. His schedule’s crazy, but we make it happen, because those details matter.”

Aw. Wilson is clearly a doting dad, and the world needs more of those — especially the kind of parent willing to get down on the floor and practice his cat-cows. When he lifts little Sienna up to the sky, I think it's safe to say he's lifting our damn hearts along with her.