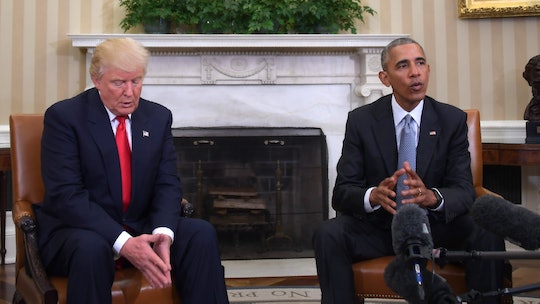 About That "Golden Showers" Trump Allegation...

Just 10 days ahead of his official swearing-in, the president-elect has been hit with a wave of serious allegations, ranging from scandalous claims to downright obscene and treasonous alleged behavior. Published in full by BuzzFeed News, the 35-page Russia dossier revealed damaging Trump allegations, though the validity of the claims are ultimately unverified. Romper has reached out to the Trump transition team for comment but has not yet heard back.

In its release of the documents, BuzzFeed has noted that the dossier contains "specific, unverified, and potentially unverifiable allegations of contact between Trump aides and Russian operatives, and graphic claims of sexual acts documented by the Russians." The "graphic claims" mentioned, however, are unmistakably odd, especially the following allegation involving Trump, the Obamas, prostitutes, and urination:

[Trump hired] the presidential suite of the Ritz Carlton Hotel, where he knew President and Mrs. Obama (whom he hated) had stayed on one of their official trips to Russia, and [defiled] the bed where they had slept by employing a number of prostitutes to perform a 'golden showers' (urination) show in front of him.

According to the dossier, this claim has the potential be verified, seeing as "the hotel was known to be under FSB control with microphones and concealed cameras in all the main rooms to record anything they wanted to." As of now, though, no proof of this event has been revealed.

Trump's "golden showers" allegations, though perhaps the most startling piece of the dossier, are surrounded by other disturbing claims. For one, the dossier asserts that Russian President Vladimir Putin endorsed Trump's secret relationship with Russia, to the extent that "[Trump] and his inner circle have accepted a regular flow of intelligence from the Kremlin, including on his Democratic and other political rivals." The report also claims that, over time, the FSB has collected enough intelligence on Trump to "blackmail him." (Again, none of those claims have yet been verified.)

Before BuzzfeedNews released the full report, CNN had reported that both President Obama and Trump were shown the report last week (as abbreviated into a two-page synopsis), noting that many of the myriad allegations were secured by a former British intelligence operative whose past intel, CNN notes, "US intelligence officials consider credible." What's more, others were in on the information as well. FBI Director James Comey knew about the dossier, opting to disengage from the allegations and instead focus on reopening an investigation into Hillary Clinton's e-mail server.

The validity of these allegations is still completely in question, but they paint an even more unfavorable picture of the president-elect than before.