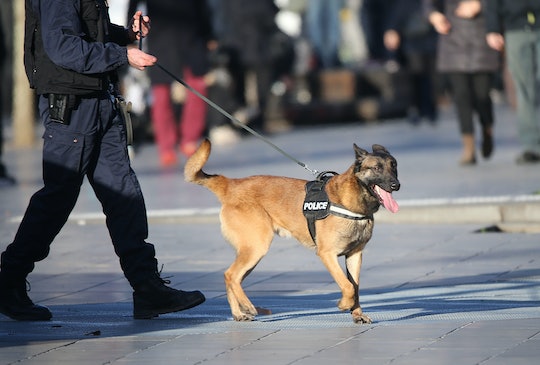 From Russia with love: Russian minister for internal affairs Vladimir Kolokoltsez posted to the ministry's Facebook page that Russia will send a puppy to France after Diesel, a French police dog, was killed last Wednesday in a police raid in Saint-Denis, a suburb of Paris. Diesel, a seven-year old Belgian Malinois, was killed in the line of duty as she entered the apartment where suspected Paris terror attack mastermind, 27-year old Abdelhamid Abaaoud, was hiding out from authorities. The dog's death prompted a wave of international support with hashtags such as #JeSuisChien ("I am dog") and #JeSuisDiesel trending across Facebook and Twitter.

Named Dobrynya after a legendary Russian hero characterized as the "personification of the force, of goodness, of bravery and altruism," the puppy will been sent to France as a "testimony of solidarity with the people of France and the French police in the context of the fight against terrorism," the statement read in part.

While it's a lovely gesture from Russia, a new puppy doesn't suddenly wave a magic wand and make everything okay — Diesel was a beloved member of the Police Nationale whose loss has been deeply felt in Paris and around the world. The terror attacks in Paris on Nov. 13 were bad enough, but then ISIS had to go and kill a dog on top of it all? Diesel wasn't some kind of police tool; one handler told the Daily Mail that her death was "a little like losing one of our colleagues." She can't just be replaced.

And while the puppy is really cute —

— it also probably isn't going do much to relieve tensions between Russia and the West.

Still, you have to hand it to Russia: It's a great PR move and a welcome moment of uplift after a week of terrifying events in Europe and around the world.