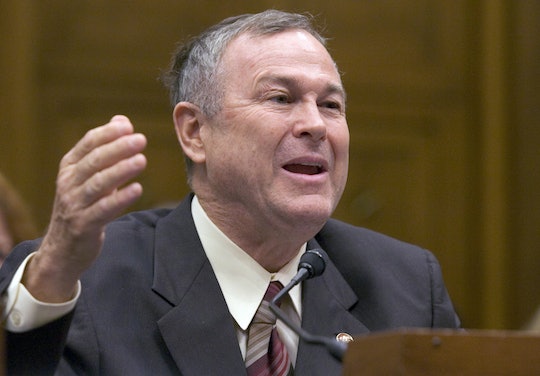 Republican Congressman Dana Rohrabacher announced on Wednesday that he'll soon be leading a congressional delegation to Russia, where he expects to meet with Russian officials and discuss different ways for the two countries to collaborate. His Russia trip has seemingly divided the GOP, who have remained relatively split when it comes to President-elect Donald Trump's pro-Russian and pro-Putin agenda. "We’re going to look at certain goals we can set with our Congress and the Duma," Rohrabacher explained on Wednesday, according to The Washington Post, referring to the Russian legislature. "What could we actually set in the legislature of Russia and in Congress? Could we work together, for example, and cooperate on space activities?"

Rohrabacher said he planned to be in Russia within a month of Trump's inauguration, although he made it clear that this was not a Trump transition team-approved event. He did, say, however, that he was close to many of Trump's advisers — and the president-elect has spoken positively of Russia and its president, Vladimir Putin, in recent weeks. Less than a week ago, Trump tweeted that Putin was "very smart" for not expelling American diplomats in response to President Obama's sanctions, and in December he shared a picture of Putin's holiday wishes to Trump and his family.

Other Republicans, however, have not quite warmed to Russia or its controversial leader. In a recent statement regarding Obama's sanctions against Russia, for instance, House Speaker Paul Ryan said, "Russia does not share America’s interests. In fact, it has consistently sought to undermine them, sowing dangerous instability around the world."

Romper reached out to both Ryan's representatives and the presidential transition team for comment regarding Rohrabacher's trip, but has yet to hear back.

Ryan isn't alone in condemning the possibility of better governmental ties with Russia. Republican Sen. Lindsey Graham told CNN just last month: "I can't imagine I would vote for anybody that believes that we should not sanction Russia, given the fact that they did in fact interfere in our election." Sens. Marco Rubio and John McCain have also expressed concern about Russia's ties to some of Trump's top Cabinet picks.

For Rohrabacher, though, that's not a problem. He plans to loop in the GOP's Russia dissenters on his trip as well. "I’ll bring some people with me who seem antagonistic toward having better relations," he said, according to The Washington Post. "We’ll put them together, sit down with some people in Russia who can talk to them, person to person, and start to have a real dialogue instead of screaming epithets at each other."

In the meantime, however, it seems that Russia will remain a significant divider within the GOP — and by the amount of conflict the topic has generated within the party already, that's unlikely to die down anytime soon.