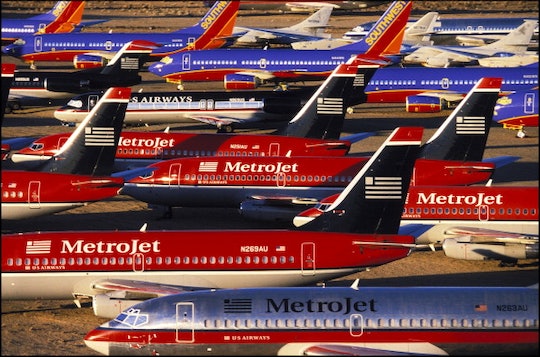 Russian Metrojet Plane Crash Caused By "External Factors," Says Airline, And Everything Else We Know So Far

Though it still remains to be seen what caused Russian Metrojet Airbus A321 to crash over Sinai Saturday morning, Monday morning brings a bit more clarity to the situation. At least, if Metrojet's claims surrounding the crash of the plane, which was headed for St. Petersburg before disappearing from the radar, are correct. Metrojet claims KGL-0268 was brought down by "external factors," denying any sort of technical glitch that could have contributed to its fall.

Still, that sort of development leads to plenty more question marks — what was the "external factor"? Is this a tragedy akin to the downing of MH17 over eastern Ukraine? And if that "external factor" was a party who took down the flight, who was it? Though there's plenty of mystery still surrounding the flight, here's what we do know so far.

There Were No Survivors

Though not much can be said with clarity surrounding the crash of the Metrojet flight, officials have been able to confirm one thing: Though initial reports indicated there were voices from the crash site (leading some to hope there were some passengers who were alive), there were no survivors of the Russian crash. A total of 224 passengers and crew members that were on the flight all perished, making this the deadliest aviation incident in Russian history. (Of those passengers, 138 were were women, 62 were men, and 17 were children.) Following the crash, bodies of the passengers were taken to a Cairo morgue, while bodies of 144 of the victims arrived in St. Petersburg.

Most Of The Passengers Were Russian

Though the airline took off from Egypt's Sharm el-Sheikh, the majority of those flying on KGL-0268 were Russian. According to reports, 214 of the 217 victims were Russian, while three were citizens of Ukraine. Following the crash, Egypt's President Abdel-Fattah el-Sisi offered "sincere condolences" to those affected by the crash and hoped for a "swiftly" carried out investigation, while flags flew at half mast in Russia to honor the victims.

KGL-0268 Was Flying Over Dangerous Territory

The crash site, which extended over 7.7 miles, is in Central Sinai, near where Islamic militants are fighting their cause. In fact, some airlines are wary about flying over the area following Saturday's crash — Lufthansa and AirFrance-KLM said it would not fly its airlines over the area until the investigation of the crash is complete. Emirates claimed it would fly around the area.

The Plane Slowed Down Before Crashing

According to Metrojet's Alexander Smirnov, KGL-0268 not only dropped 5,000 feet in altitude before crashing, but also slowed down a total of 186 miles per hour before impact. This, along with Smirnov's insistence that the Metrojet plane crash cause "could only have been a mechanical impact on the plane" and that the "plane was in excellent condition," all but seems to dismiss any earlier claims from Egyptian authorities that a technical error was to blame.

The Plane Had Had Problems In The Past

Despite Smirnov's insistence that the Metrojet aircraft was in "excellent condition," reports indicate that the plane had at least suffered trouble in the past. Authorities at Metrojet have admitted that the plane's tail was hit on the runway in 2001, but had since been repaired. Also, Russian reports claim that one of the flight's pilot had critiqued the plane's condition speaking to his wife. Still, there's no indication yet that the plane itself is to blame for the crash.

ISIS Has Claimed Responsibility For The Crash

Even if no one believes them. On Saturday, after news came that KGL-0268 disappeared from radar and crashed, the Islamic militants said they were the ones who took it down. Their statement was simple: "The fighters of the Islamic State were able to down a Russian plane over Sinai province that was carrying over 200 Russian crusaders. They were all killed, thanks be to God." That said, there is skepticism surrounding that fact — authorities believe ISIS does not have the weaponry to take down a jet 30,000 feet in the air. Both Russia's transport minister and Egypt authorities denied the claim, while Mark Rosenker, a former chairman of the National Transportation Safety Board, posited to The New York Times that a luggage bomb could be to blame.

Update: On Monday, James Clapper, the U.S. Intelligence Director, said there is currently "no evidence" that the Russian plane crashed due to terrorist activity. "Once the black boxes have been analyzed ... perhaps we'll know more," he said."

We Know... That We Know Very Little At All

As with any plane crash, only a complete and thorough investigation can tell us what exactly happened with Metrojet's airliner on Saturday. (Luckily, the plane's black box is reportedly in good shape.) Until then, the theories will only continue.