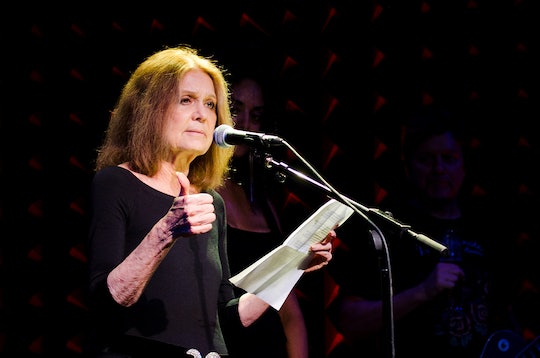 If you felt something this past weekend — like an unexplainable disturbance in the force, or whatever shift happens when two big planets pass each other by — I can explain. It was just Gloria Steinem and Ruth Bader Ginsburg sitting down for some tea and casual conversation about their badass careers in women's rights. Yep; Gloria and the Notorious RBG herself met for lunch this weekend. It all happened on Nov. 14, for The New York Times' series "Table for Three," where the two talked about rap names, abortion, marriage, and empathy. The whole interview is pretty great, but I'll be honest, there were a few real gems of that shined brighter than the rest.

These two hardly need introduction, but it's worth noting that before she was "the Notorious RBG," Ginsburg was Columbia Law School's first tenured female professor and a founder of the American Civil Liberties Union's Women's Rights Project. She also successfully argued five cases before the Supreme Court years before she practically became its mascot.

Steinem, on the other hand, spent years as a frustrated journalist before founding Ms. magazine in 1971, which would grow into a nexus for news, theory, and narrative about womanhood and women's rights. She famously went undercover as a Playboy bunny to expose their treatment and made invaluable connections and inroads between the civil rights movement and women's liberation.

The two women, both now in their eighties, have been friends a long time, and, more importantly, they've been serious allies. Without them, who knows where we'd be. They said a lot of interesting things during their weekend lunch — but here are some of the lines that will stick with you the most.

My mother was a powerful influence. She made me toe the line. If I didn’t have a perfect report card, she showed her disappointment. - Ruth Bader Ginsburg

RBG and Steinem discussed the forces behind their success. Their mothers were both extremely powerful motivators. Ginsburg's wanted perfection and Steinem's had wanted to be a writer herself. Steinem said during the interview, "Perhaps we were living out the unlived lives of our mothers."

Justice O’Connor once said: “Suppose there had been no discrimination when we finished law school. We’d be retired partners from large law firms today.” She got her first job working for free for a county attorney, and she was very high in her class at Stanford. - Ruth Bader Ginsburg

The great thing about obstacles is they cause you to identify with other groups of people who are facing obstacles. - Gloria Steinem

RBG and Steinem both faced discrimination early on in their careers, but they credited those challenges with pushing them to work for women's rights. They experienced firsthand what they would spend a lifetime trying to remedy. Added Ginsburg:

There were many firms who put up sign-up sheets that said, “Men Only.” And I had three strikes against me. First, I was Jewish, and the Wall Street firms were just beginning to accept Jews. Then I was a woman. But the killer was my daughter Jane, who was 4 by then.

Steinem spoke about the link between the civil rights movement and the women's movement. As she notes, Steinem was accused of riding on the coattails of civil rights leaders and putting energy into a movement for fanatics. Other journalists even warned her to stop covering the women's rights issues because they were convinced it would ruin her career. But she wouldn't listen.

It's important to say that the women's movement was disproportionately pioneered by black women. These are not two different movements; they are profoundly connected. - Gloria Steinem

Steinem and RBG discussed marriage and marriage equality, past and present. Unlike Steinem, RBG married very young and even decided to go into law jointly with her husband Marty. They eliminated the medical field because the labs interfered with Marty's golf schedule and business because the school had not yet begun accepting women. That's commitment.

I assumed I had to get married. Everybody did. If you didn’t, you were crazy. But I kept putting it off: “I’m going to do it, but not right now.” Until I was in my late 30s and the women’s movement came along, and I realized: I’m happy. Not everyone has to live the same way. - Gloria Steinem

Near the end of the conversation, the women spoke about next steps. Equal pay, equal parenting, and equality in marriage are still hovering on the horizon, but, they agreed, they're coming.

Equal pay for women would be the biggest economic stimulus this country could ever have. Big-time profits are being made from gender roles as they exist. It would also be win-win because female-headed households are where children are most likely to be poor. - Gloria Steinem

The entire interview is seriously worth a read. And here's why (in case you haven't already guessed it): You know that game where you choose the famous people you would invite to dinner? Gloria Steinem and Ruth Bader Ginsburg sitting down for a chat is pretty much a dream come true for anyone born in the 20th century — and reading their afternoon chat is like the next best thing to really being there yourself in the flesh.

More Like This
WowWee’s New Fairy Finders Will Keep Kids Distracted For Hours
What Exactly Are Minions, Anyway ?
Megan Fox Explains Why She Asked Machine Gun Kelly If He Was Breastfed As A Baby
Family Of Grandfather Killed In Highland Park Mass Shooting Say He "Saved" Their Lives