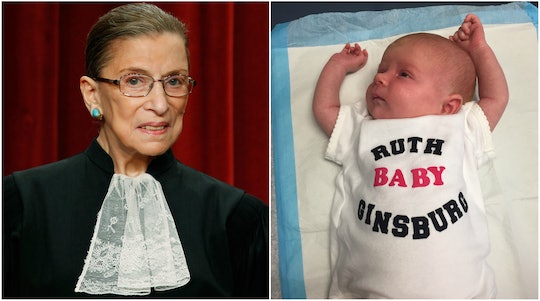 The Biggest Trend In Parenting Is ~Supreme~

Justice Ruth Bader Ginsburg is everywhere, and I don’t just mean “in the Supreme Court” or “at the gym, doing more push-ups in one day than you or I will do in our entire lives.” (The woman is 85 years old and a two-time cancer survivor and she is still doing push-ups weekly. According to her trainer, her form is excellent.) When I say that she is everywhere, I mean she is on cross-stitch patterns. She has been featured in children’s books and coloring books. Her face is splashed across baby onesies on Etsy. Kids are stepping out in lace collars. There are bibs manufactured to look like jabots. It is 2018, she is the oldest supreme court justice, and Ruth Bader Ginsburg is a force among the preschool set.

Emmy Caparaz, 17 months old, dressed as RBG for her second Halloween as a resident of the area covered by the Ninth Circuit. Her mother, Liz Caparaz, an artist in Los Angeles, hot glue-gunned some lace to an adult t-shirt, then made a toilet roll into a gavel. They headed to a party at their friends' house, where Emmy ran around with little Ruth, named for — you got it.

Liz says that her RBG obsession pre-dates parenthood, and was something she was excited to teach her daughter about. "We really try to expose her to as many positive feminist role models as possible," she says on a joint call to Romper with her husband Jason. "We have a million books," she says, citing books about Frida, Rosie the Riveter, Elizabeth Warren. "They make so much now that you can't help it."

The Caparaz' see Ginsburg's personal story, losing her mother in high school, and being one of a spare few female law graduates from Harvard, then going on to reach the Supreme Court, as a statement of possibility in the "current climate."

"Not only is she a she," Jason says of his daughter, "but she's mixed race — I'm Filipino and my wife is a European, uh—"

They want their daughter to have the "encouragement and fortitude and knowledge to succeed."

Notorious RBG merch starts even younger than the picture-book set.

The costumes were thrown together hastily the night before — sans lace jabot, unfortunately — and by morning, Isla was rocking a polkadot robe and throwing out "I dissent!" left and right, says Scritchfield, who describes herself as "definitely the feminism kind of mom trying to break down the gender roles."

The inspiration was a picture book, I Dissent: Ruth Bader Ginsburg Makes Her Mark, by Debbie Levy (Isla's sister Audrey, 5, is pictured dressed as Malala Yousafzai) — a book that carries a near-mythical 4.9-star rating on Amazon. Reviewer Lissa, who gave it a rare one-star rating, describes it as "spoon-fed propaganda for the far left babies to ensure they don't stand a chance in the real world."

In other words, exactly the kind of fodder civically engaged parents feel good about getting for their children.

But Notorious RBG merch starts even younger than the picture-book set.

The onesie on the left, below, positioned next to the requisite succulents in a flawless flat-lay, is from the Etsy shop MilkBasics, and it’s far from the only offering. Etsy is just rife with cotton RBG onesies with which your clothe your bairn. Look up Ruth “Baby” Ginsburg if you don’t believe me. Within seconds, you’ll be up to your elbows in RBG baby mobiles, RBG wall art, and RBG dissenting bibs, like the one at right from Rebecca Rodriguez' shop dirtsastudio.

Dissent is somewhat of a sub-theme within the RBG genre of retail. Even before she became known as “The Notorious RBG,” Ruth Bader Ginsburg spent most of her time being told she couldn’t do something and then just doing it anyway. She went to Harvard when the prevailing attitude was, “It’s great that you’re here studying law, but you know what would be even better? If you were a man.”

Despite graduating top of her class, RBG struggled to find work for reasons best described as “A woman lawyer? Yeah, right. Come back when you leave the toilet seat up and know who was the second-string quarterback for the Dallas Cowboys in 1960.” Eventually she became a clerk, taught at Rutgers and Columbia, co-founded the ACLU's Women’s Rights Project, and was appointed to the U.S. Court of Appeals for the District of Columbia, which is the kind of employment history that will make you look in the mirror and ask yourself what you’ve accomplished with your own sorry excuse for a life.

And this was all before she had even been appointed to the Supreme Court in 1993. Some people were overjoyed by the decision; others were wary. Still others rolled their eyes. “Just what we need,” they said. “Another woman. It's like they're taking over. What is that, two now?” (It was. The first was Sandra Day O’Connor, who retired in 2005. There would not another woman on the court until Sonia Sotomayer in 2009.)

RBG made a name for herself as a moderate. Back then, she wasn’t big on making waves. Instead, she chose to quietly dismantle the oppressive patriarchal system one case at a time. Example: Weinberger v. Wiesenfeld, a case she took when she was still teaching at Rutgers. Stephen Wiesenfeld, who became a single dad after the death of his wife, was unable to receive Social Security benefits. He was a man, after all, and it was assumed that the role of caretaker was a female one. It was an early example of her family-friendly work, and work that she notably performed as a mother. The court unanimously sided with RBG and Wiesenfeld, agreeing that gender-based distinctions in terms of Social Security were stupid, and laid the groundwork for later cases. (The word they used was “unconstitutional,” but I stand by what I said.)

That Ruth Bader Ginsburg — a diminutive, soft-spoken octogenarian — has captured hearts and minds is, to use legal jargon, unprecedented.

RBG applied this same pick-your-battles philosophy to her work as a Supreme Court Justice. She was instrumental in landmark rulings like US v. Virginia (which struck down the Virginia Military Institute’s male-once admissions policy) and Safford Unified School District v. Redding (which ruled that the strip search of a 13-year-old girl was unconstitutional, which really makes you wonder about the jurisprudence of the other side).

But her dissents were just as significant as her majority opinions, and as the years went on, she became more vocal about them. In 2013, she wrote an absolutely s-c-a-t-h-i-n-g dissent in Shelby County v. Holder, the case that struck down part of the Voting Rights Act and made it easier for states to discriminate against black voters. The majority opinion said this was fine to do because racism was basically over. RBG read her dissent from the bench, which rarely happens, so she got to say the following words to their faces: “Throwing out pre-clearance when it has worked and is continuing to work to stop discriminatory changes is like throwing away your umbrella in a rainstorm because you are not getting wet.”

It was, however, RBG’s Burwell v. Hobby Lobby dissent that cemented her reputation as a headstrong feminist hero and a darling of the internet zeitgeist. RBG took issue with the Court’s decision to allow the corporate chain to refuse to cover their employees’ birth control for religious reasons. She argued that the ruling set a dangerous precedent and concluded her 35-page dissent with “The court, I fear, has ventured into a minefield.”

Suddenly, memes were being made. Hashtags were cropping up. There was a Tumblr blog dedicated to her that later became a book called Notorious RBG: The Life and Times of Ruth Bader Ginsburg. There were pins, costumes, and — of course — baby onesies immortalizing some of her most famous quotes, like this one from Etsy user Genevieve Jordan's shop GenevieveDoodles based on a talk RBG gave at Georgetown University: “People ask me sometimes, 'When do you think it will be enough? When will there be enough women on the court?' And my answer is when there are nine.”

RBG, having served more than two decades on the Supreme Court, was now in a position to rock the boat. Gradually, she started making waves, although a better word might be tsunamis. In fact, her dissents have become so legendary that they inspired a children’s picture book called I Dissent: Ruth Bader Ginsburg Makes Her Mark. RBG is no longer just a hero to adults; she's a hero to kids, too. A Goodreads reviewer named David read the book with his daughter, Lyra, who couldn’t believe what RBG had been forced to put up with:

Some of the stories of prejudice against women are not so surprising to Lyra. She watched her mother board a bus to the Women's March in DC, after all. But she does find it surprising to read that Supreme Court justices had actually once said the following: "Woman has always been dependent on man. The natural and proper timidity and delicacy which belongs to the female sex evidently unfits it for many of the occupations of civil life.”

That Ruth Bader Ginsburg — a diminutive, soft-spoken octogenarian — has captured hearts and minds is, to use legal jargon, unprecedented. As a society, our proclivities tend to be more along the lines of Chrissy Teigen or Kate Middleton. You know, someone with great hair and an Instagram account.

But perhaps the reason RBG has become a hero to the old as well as the young — the reason parents, in particular, are so obsessed with her and are eager to introduce her to their kids — is best summed up by a woman we spoke with named Elizabeth B.

Elizabeth is an attorney by day and a purveyor of witty onesies by night. When asked what her goal was in creating a handmade Ruth “Baby” Ginsburg onesie for a friend's baby, she said she wanted to “inspire that level of steely, tenacious greatness at the earliest possible juncture — and to establish,” for the baby in question, that “even while she was pooping her pants eight times a day, she was part of a long chain of sisterhood that had made her world better, and in turn she’d one day do the same.”

RBG is a role model, inspiring our kids to be activists and dissenters—to look at injustice and say, “I don’t agree.” But she’s not just a role model. She is also a catalyst for change. She is creating the world we want our kids to live in, one where our daughters won’t face discrimination in the workplace or be strip-searched at school, where our sons can have husbands, where our kids’ voices will be heard no matter their skin color. She’s fighting the good fight, and she’s doing it all under an administration that would sooner show her the door.

And she’s doing this so that children like Lyra will get to learn about the way the world used to be, shocked by the way women were once treated, rather than experience it firsthand. We may not have achieved that oh-so elusive equality just yet, but with the help of Lyra and the other Ruth Bader Ginsburgs of tomorrow, we might just get there.

At 17 months old, RBG apprentice Emmy Caparaz appears very tuned into the world. "I have to stop watching the news," Liz says, noting that her daughter has begun to pick up on everything. Already, Liz tells me, "She says Barbara Bush very clearly."