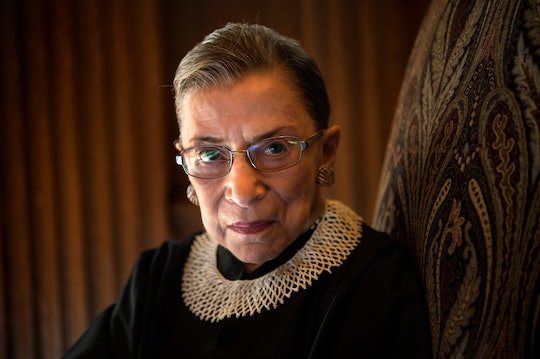 Days Before Her Death, RBG Shared Her Dying Wish With Her Granddaughter

Just days before her passing and months before the presidential election, U.S. Supreme Court justice Ruth Bader Ginsburg shared her dying wish with her granddaughter Clara Spera. A message that only further highlighted her passion and dedication to her life's work.

"My most fervent wish is that I will not be replaced until a new president is installed," Ginsburg told her granddaughter days before she died at her home in Washington, D.C., according to NPR. Ginsburg died on Friday, Sept. 18, 46 days before the presidential election that will decide if President Donald Trump remains in the White House for another four years.

The message Ginsburg dictated to her granddaughter — who once told Glamour she affectionately would call "Bubbie" — is one many have thought about in recent years as the legendary justice's health declined. And Ginsburg's own concerns about the future after her death were, of course, valid.

On Saturday, in fact, the day after her death, President Trump said on Twitter that he and the GOP would work quickly to fill her vacant seat. "We were put in this position of power and importance to make decisions for the people who so proudly elected us, the most important of which has long been considered to be the selection of United States Supreme Court Justices. We have this obligation, without delay!" Trump tweeted.

What exactly the future holds for the trailblazing justice's vacant seat remains to be seen, but Ginsburg leaves behind a historic and important legacy in the nation's ongoing fight for equality and justice. Throughout her expansive career, she fought for women's rights, equal access to education, and so much more.

As Chief Justice John Roberts said in a statement announcing Ginsburg's passing on Friday, the nation is mourning a remarkable woman. "Our nation has lost a justice of historic stature," Roberts said. "We at the Supreme Court have lost a cherished colleague. Today we mourn but with confidence that future generations will remember Ruth Bader Ginsburg as we knew her, a tireless and resolute champion of justice."