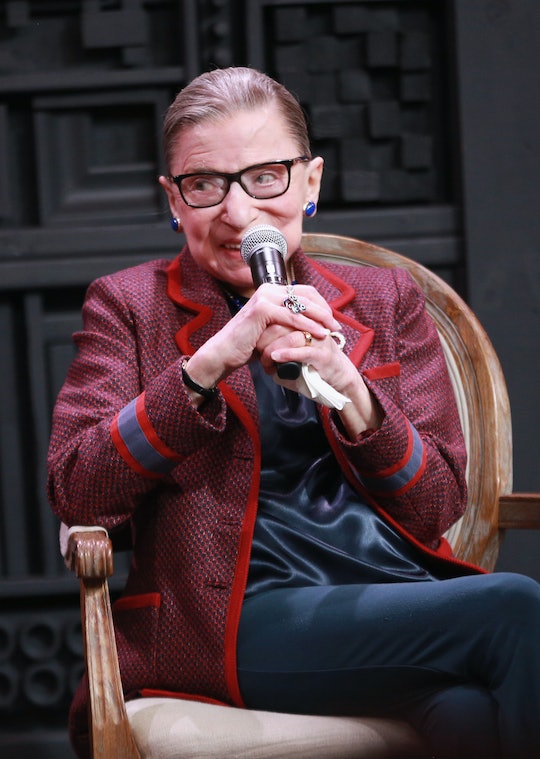 Fans are gearing up for the second installment of The LEGO Movie, which hits theaters on Friday, Feb. 8. The movie packs some major star power, with lead voice work by Chris Pratt, Elizabeth Banks, and more. So that means characters like Emmett, WildStyle, and UniKitty will be back in action. But there's also one special on-screen cameo that's getting lots of attention. Ruth Bader Ginsburg will be making an appearance in The LEGO Movie 2: The Second Part and fans are hyped.

A new trailer for the movie dropped this weekend, giving fans a glimpse of her all new minifigure, according to Mashable. But don't expect to hear her voice. She was not required to do voice work for the film, but gave producers the OK to use her likeness, according to the BBC.

"These movies are so full of surprises. And we were thinking, 'Who’s the last person you would think to see in a Lego film as a minifig?' Ruth Bader Ginsburg!" Mike Mitchell, the film's director, told USA Today. "And we’re all huge fans. It made us laugh to think of having her enter this world."

In fact, LEGO will release a real-life version of the RBG minifigure to coincide with the release of the movie, according to Mashable.

"So there will be a real Ruth Bader Ginsburg toy that boys and girls can play with. It will even come with a gavel," as Mitchell explained to USA Today.

But it was screenwriters/producers Chris Miller and Philip Lord who came up with the idea to include everyone's favorite Supreme Court justice.

"We just were trying to think of people who should be immortalized in Lego and who seem fun at weddings," the two said in a joint statement to USA Today.

Fans are, to put it mildly, having a complete and total field day with this new information. Just a glimpse of her was enough to set them into high gear.

As suspected, there's likely going to be a high demand for her figurine once it's released. As one fan said on Instagram, "I NEED THE RBG MINIFIGURE 😭"

Of course, there were some on the other side of the fence as well; people who felt like politics had no place in a children's movie. But RBG's presence doesn't have to be political, and this fan totally summed it up in his Instagram comment:

"It’s not pushing politics. She’s mentioned so much in pop culture because she’s a role model. Nothing about policies or anything like that."

And other fans totally agree.

But overall, people are just excited that it's happening. This twitter fan says: "Adding Lego character to your list of accomplishments is so badass!"

The Lego Movie 2: The Second Part takes place five years after the first movie. Emmett Brickowski must save his kidnapped friends from the dreaded Sis-Tar System, per The Wrap. The first LEGO movie revolved around the imaginary world of a young boy in his father's basement. Well, the Sis-Tar system is the world that his sister has created. Thus ensues the battle of the siblings for a world where LEGO dimensions can co-exist peacefully.

Ruth Bader Ginsburg minifigure is part of the Sis-Tar System, as the sister sites her as one of her biggest role models, according to The Wrap.

It's been a big year for Ruth Bader Ginsburg. The biopic about her, On the Basis of Sex, is garnering a lot of Oscar buzz, and a documentary about the beloved justice, RGB, was released to much fanfare, according to The Wrap.

Most recently, RGB missed her first-ever day in court, after two cancerous tumors were removed from her lungs, according to the Washington Post. The growths were found after a fall that caused three broken ribs, according to Politico.

RGB shows no signs of slowing down. In fact, she's already picked her law clerks at least through 2020. And now, thanks to her upcoming cameo in the new LEGO movie, she's going to be introduced to a whole new generation of fans. Here's hoping fans see more of her in the LEGO universe in years to come.