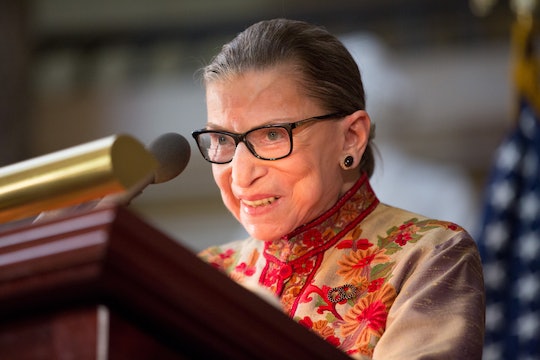 Amid a major push by conservative lawmakers to restrict access to safe and legal abortions, the Supreme Court Monday announced its ruling that a Texas law that has already closed more than half the state's clinics is unconstitutional. When he signed the bill into law in 2013, then-Texas Gov. Rick Perry said it was an "important day" for those who "support the health of Texas women." But Justice Ruth Bader Ginsburg's quote in the SCOTUS abortion case succinctly obliterates the assertion that abortion restrictions benefit women in any way.

The twofold law at the center of Whole Woman's Health v. Hellerstedt required that abortion providers in the state have admitting privileges at a nearby hospital and that their clinics meet regulations previously reserved for ambulatory surgical centers. According to NBC News, the Center for Reproductive Rights called the law, known as H.B.2, "an absolute sham," as abortion is a relatively simple procedure that rarely requires hospitalization.

Texas lawmakers have maintained that the law existed "to ensure patient safety and raise standards of care" and that states should be able to use discretion in such medical cases, but the Notorious R.B.G. is having none of it.

"It is beyond rational belief that H. B. 2 could genuinely protect the health of women," Ginsburg wrote in her fiery, one-paragraph concurrence, which is nestled within the 107-page opinion.

In fact, one of the many reasons that H.B. 2 is unconstitutional, as Ginsburg wrote, is that abortion complication rates are incredibly low — lower than childbirth, actually, which does not require women to check into an ambulatory surgical center. Zing. It's further proof that H.B. 2 was simply a Targeted Regulation of Abortion Providers (TRAP) law, and that it imposed an "undue burden" on women seeking abortions. That's a practice the court outlawed in 1992, according to The New York Times.

Medical professionals have consistently and wholeheartedly agreed that H.B. 2 adversely affected women. And — in what is perhaps her most compelling argument that this is true — Ginsburg noted in her concurrence that the closure of clinics could cause desperate women who don't have access to a clinic to turn to unregulated means to terminate their pregnancies:

When a State severely limits access to safe and legal procedures, women in desperate circumstances may resort to unlicensed rogue practitioners, faute de mieux, at great risk to their health and safety. So long as this Court adheres to Roe v. Wade and Planned Parenthood of Southeastern Pa. v. Casey, Targeted Regulation of Abortion Providers laws like H. B. 2 that do little or nothing for health, but rather strew impediments to abortion, cannot survive judicial inspection.

If the court had voted the other way, only nine of the state's 19 remaining abortion clinics could have survived, The Guardian reported (before the law passed in 2013, there were 42). And, according to a brief for the clinics, a geographic area the size of California within Texas would have been left with exactly zero abortion providers.

Ginsburg's assertion that the shuttering of abortion clinics causes harm to women is certainly based in a stark reality. According to a recent New York Times op-ed, the Guttmacher Institute found that Mississippi was the state with the most Google searches for how to perform self-induced abortions in 2015. And, you guessed it, Mississippi has just one abortion clinic.

The striking down of H.B. 2 will go down in history as a major victory for reproductive rights activists in the United States, and Ginsburg successfully called out conservative lawmakers who sought to impose their moralist agenda on women under the guise of protecting their health in the process. In an era of TRAP laws and other challenges to the legality and accessibility of reproductive justice, Ginsburg is the justice leading the way.